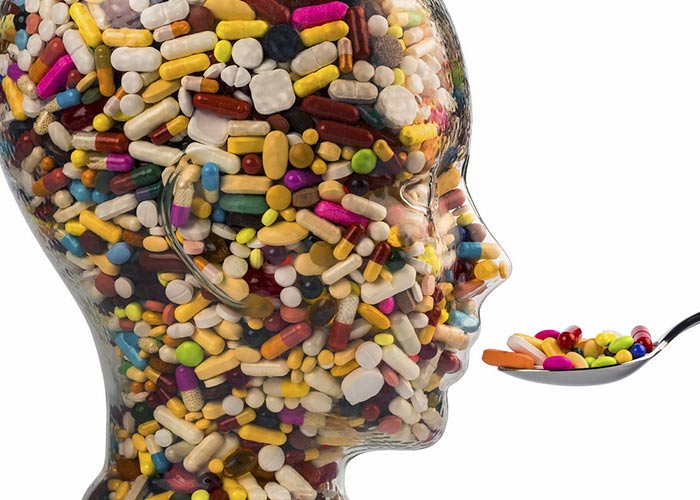 Drug abuse involves compulsive and excessive intake of drugs over a period of time. Repeated use of drugs results in developing an addiction that has harmful repercussions. It is a problem that directly impacts the structure and functioning of the brain causing grave damage to it. Drug abuse, a term used for obsessive and excessive use of drugs, is a common problem these days. The regular use of drugs is self-damaging. It leads to addiction and causes behavioral changes. Drug abuse particularly impacts the brain and can also lead to other health issues such as kidney failure and heart problems.

Drug abuse refers to obsessive and excessive use of drugs. It impacts a person’s mental as well as physical health mainly causing damage to the brain. Drugs are initially taken by choice owing to different reasons. However, gradually it becomes difficult to resist them. There are different reasons why people take the road to drugs. Here is a look at these and also the ways to curb this problem.

Many people have problems with their families. For them, drug abuse seems to be an easy escape from the stress caused due to those problems. Youngsters, particularly try to tackle their relationship problems by way of drug abuse.

The pressure at the workplace and competition at the school and college level is another major cause of drug abuse.

It is often seen that a person’s genes also play a significant role in his/ her turning addict. The problem usually, not necessarily, runs in the family.

The feeling of loneliness or emptiness can also force a person to turn to drugs.

Different types of medications are given to people suffering from different stages of drug abuse. Here is a look at these:

The patient’s brain needs to be trained to adapt to the absence of drugs. This treatment helps the patients control their craving for drugs.

People who stop using drugs can experience symptoms such as stress, anxiety, mood swings, etc. They are prescribed medications to overcome these symptoms.

There are many factors that can trigger a relapse. Medications are being developed to control these triggers.

Drug Abuse is a common problem these days. Though hard to resist, the usage of drugs can be controlled with proper medication and guidance.

Drug abuse is a chronic disease. Those who abuse drugs are unable to resist them despite being fully aware of their harmful consequences. Regular intake of drugs can damage the brain adversely and can also lead to various other health problems. Brain changes caused due to heavy intake of drugs can be persistent. Drug addiction is thus known to be a relapsing problem. Here is a look at the various causes of drug abuse and also the ways to overcome this problem:

The factors causing drug abuse have mainly been classified into three categories. Here is a look at each of these in detail:

A person’s environment includes various factors such as his social status, family, friends, professional life, etc. Problems in the family, bad company, competition at work and lack of proper guidance and support from parents or teachers can often lead to drug abuse.

Drug abuse can also be a genetic problem. A child stands a high chance of falling prey to drug abuse if either of his parents has been under the influence of the same. Certain mental disorders can also cause a person to turn towards drugs.

Though drug addiction can develop at any age however those who begin taking drugs at an early age have a high chance of getting addicted. This is because those areas in their brain that are responsible for self-control, judgment and decision making are still in their development stage. This is the reason why teenagers are more prone to drug abuse.

Though difficult, there are ways to cure the problem of drug abuse. Here is how:

It is suggested to visit a doctor and seek proper medication to overcome this problem. Most of those who are suffering from this grave problem are recommended to join a rehabilitation center to control it.

The damage caused due to drug abuse must be replenished in order to become physically and mentally fit and this can only be done by having a healthy diet. It is also suggested to exercise regularly in order to keep stress at bay.

Drug abuse, mainly caused in an attempt to overcome emotional upheaval in one’s life, can be self-damaging. It is suggested to stick to a healthy lifestyle and steer clear of unhealthy practices such as dependence on drugs or alcohol to stay fit and active.

Drug abuse is excessive, compulsive and repeated use of drugs. It is a chronic disease that can damage a person’s physical as well as mental health beyond repair. Initially, a person takes drugs by choice. However, after some time it becomes almost impossible for him/ her to resist them. Drug addiction is difficult to control and is often referred to as a relapsing disease. It mainly impacts the brain.

Why does this problem occur?

Different people get addicted to drugs owing to different reasons. Here is a look at some of the main reasons that lead to this problem:

Many people take drugs to overcome the feeling of loneliness. Many times, people feel that they have no one to share their joys and sorrows with and they eventually take to drugs in order to get rid of this feeling.

Growing competition in schools, colleges and at work leads to pressure which is often difficult to handle. Many people turn to drugs in order to handle this pressure.

This is also a common reason for drug abuse. Youngsters often take drugs in order to overcome the emotional upheaval caused due to failed relationships.

Many people, mostly teenagers are just curious to find out how drugs taste as well as their after-effects. Little do they know that this experimenting can lead to addiction before they would even realize it.

Drug abuse is often hereditary. If any of the parents are addicted to drugs, the child has a high risk of incurring the problem.

How to curb this problem?

While it is difficult to get out of the dark world of drug abuse and it is highly likely for the problem to relapse, there are certain things that can help those trying to get rid of this problem. These are discussed below in detail:

It is suggested to consult a doctor or better still join a rehabilitation center in order to get rid of drug abuse. As easy as it is to fall prey to this problem, it is equally difficult to come out of it. The step by step approach followed at the rehabilitation centers is an effective way to curb this issue.

Your mental, as well as physical health, deteriorates due to heavy intake of drugs. In order to replenish the lost nutrients, it is suggested to have a healthy diet.

Physical activities such as jogging, dancing, swimming, yoga, etc promote the growth of endorphins also known as the happy hormones. It is suggested to indulge in such activities to get rid of drug addiction as reducing the drug dosage can increase the stress level.

Drug Abuse is a grave problem. Especially common among the youth these days, it can be damaging for those who are addicted as well as the ones related to them. The sensitivity of the issue must be recognized and one must not start this practice in any case. Remember, there are better ways to handle problems such as loneliness, fear, anxiety, and heartbreak.

Drug abuse, the compulsive and excessive use of drugs, particularly impacts a person’s brain. It causes brain changes that make it difficult for a person to practice self-control and interfere with their power to defy the urge to take drugs. The changes in the functioning of the brain are inexorable and this is the reason why it often relapses. Even those who recover stand a high risk of returning to drugs even after years of recovery. However, this does not mean that the treatment is not effective enough. One must ensure that the treatment is not stopped. It is an ongoing process through the doctors alter the medication from time to time on the basis of the response received from the patients.

Different people fall prey to this self-damaging habit due to different reasons. Some of the key reasons for drug addiction are shared below:

A feeling of emptiness can be the worst feeling and is often difficult to handle. To get rid of these feelings, many people take the road to drugs. They feel that drugs will help them fill the void.

Many students begin taking drugs to overcome the study related stress. Similarly, there is so much pressure in the corporate offices these days that people are unable to cope up with it. They often turn towards drugs to deal with the stress and anxiety caused at work.

Many people also tend to begin taking drugs to overcome stress caused due to family issues or relationship problems and eventually become addicted to the same.

Drug addiction can even be genetic. It is often seen that this problem runs in families. So, there is a high risk of children getting addicted if their parents abuse drugs.

Most drugs prescribed by the doctors are as addictive as the street drugs. Many people mistake them as safe and repeated use of these leads to addiction.

Overcoming drug addiction can be difficult. However, it is not impossible. With the help of medication, expert guidance and support from family and friends, one can overcome this problem. Discussed below are some measures to help you overcome drug abuse.

It takes much more than a strong will power when it comes to getting rid of drug addiction. If you have taken the plunge to get out of the dark world of drugs then it is suggested to consult a doctor as soon as possible.

Reducing drug dosage may result in an increased level of stress. You can overcome this to a large extent by indulging in physical activities such as jogging, cycling, swimming, dancing, and yoga among others.

Your physical health especially the brain deteriorates because of regular intake of drugs. It is thus advised to have food that contains all the essential nutrients.

Instead of keeping your feelings to yourself, it is suggested to vent them out. Talk to your family and friends about your issues. This is a good way to de-stress rather than relying on drugs.

Drug abuse is a growing problem, especially among youths. There are many reasons that lead to this problem and the impact it has is extremely damaging. It is essential to spread awareness about the negative repercussions of drugs to discourage their use. Those gripped by this problem must consult a doctor and seek help from those close to them to come out of the hellish world of drug abuse.