Swami Vivekananda was an Indian Hindu monk and a great spiritual leader who introduced the philosophy of Hinduism to the world. He was an ascetic, a yogi who has pledged himself to help the poor, downtrodden and the needy.

Born in a well to do Bengali family in Calcutta, Vivekananda was a brilliant student with an interest in philosophy, religion, and literature. He was extremely well-read and has read almost every Hindu scripture including Ramayana, Mahabharata, Vedas, and Upanishads.

He had an excellent memory and is known to have spoken pages from famous scriptures, exactly the same as they were written.

After the death of Ramakrishna Paramhans, Vivekananda became the leader of Ramakrishna’s disciples as per the latter’s will. Thus Vivekananda established math in an old building in Baranagar, in North Calcutta and started living with some 15 of the other disciples. They spend their time meditating and performing yoga. 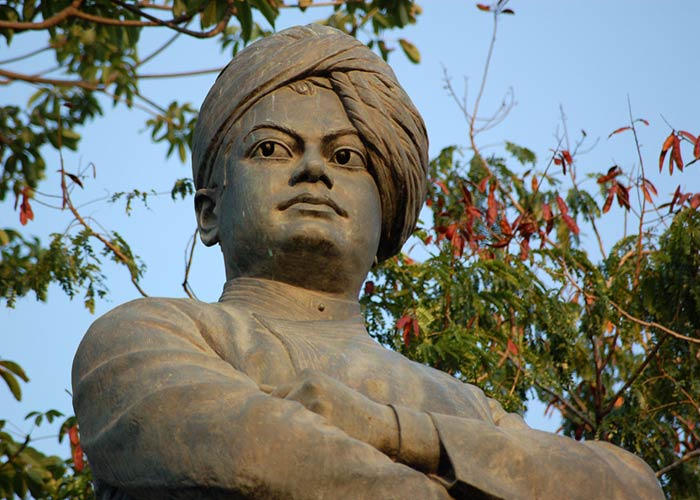 Vivekananda also wanted to attend the World Parliament of Religions, held in Chicago in America in 1893. He was very keen to attend the meeting and represent India, the Hindu religion and the philosophy of his Guru Ramkrishna Paramhans.

His dream of attending the World Parliament of Religion was realized when he was meditating on the rocks of the southernmost tip of India, Kanyakumari. The money for his travel to Chicago was raised by his disciples in Madras, today’s Chennai. Finally, Vivekananda along with Ajit Singh, Raja of Khetri, left for Chicago from Bombay on 31st May 1893.

Swami Vivekananda was a great Indian Hindu monk and a celebrated spiritual leader. Apart from being a spiritual leader, he was also an excellent thinker and a great orator. He was the chief disciple of Ramkrishna Paramhans and took the latter’s philosophy to a new level.

After the death of Ramkrishna Paramhans in 1886, his followers stopped supporting Vivekananda and other disciples. They were forced to live in a dilapidated building in Baranagar, in North Calcutta.

This building was declared as the first math of Ramkrishna’s order. Vivekananda and fifteen other disciples of Ramkrishna took vows of monkhood in the very same math. They performed yoga and meditation and survived on alms donated by begging or “Madhukar”.

After spending some time in the Baranagar Math, Vivekananda decided to travel throughout the country to understand its religious, cultural and social aspects. During this time, he came face to face with the problems faced by the people in life and took a vow to liberate these people from their sufferings.

Ramkrishna Mission also undertook various social services like establishing and running hospitals, colleges, and schools. The mission also did the job of propagation of Vedanta through conferences, workshops, and seminars. It was also involved in many relief and rehabilitation works in the country.

The Ramkrishna Mission established by Swami Vivekananda is today involved in a series of social work, running hundreds of educational institutions, hospitals, and other organizations throughout the country as well as abroad.

Swami Vivekananda was a Hindu monk who was born on 12th January 1863 in Calcutta. His birth name was Narendranath Datta and was born in a Bengali family in Calcutta. He was also born during the festival of Makar Sankranti. His father Vishwanath Datta was an attorney at the Calcutta High Court and his mother Bhubaneswari Devi was a devout housewife.

The initial spiritual beliefs of Vivekananda started taking shape after he joined Keshab Chandra Sen’s Nava Vidhan. It was during this time that Vivekananda was also introduced to the esotericism.

Sometime during 1884, Vivekananda became a member of freemasonry lodge and as well as that of Sadharan Brahmo Samaj. It was a breakaway faction of the Brahmo Samaj established by Keshab Chandra Sen and Debendranath Tagore.

Vivekananda was not satisfied with his subjective knowledge of philosophy and started frantically searching for God. In his quest for God, Vivekananda asked several Calcutta residents, if they have ever seen God. Though, his question returned no responses.

The only satisfactory response in this regard was provided by Ramkrishna Paramhans, who told eager Vivekananda – “Yes, I see him as I see you, only in an infinitely intenser sense”.  But, at that time, the Brahma Samaj had more influence on Vivekananda than Ramkrishna.

After the death of Ramkrishna, Vivekananda and other disciples were not supported by the devotees and followers of Ramkrishna. This forced some of the disciples to return to the Grihastha or family life.

Narendra or Swami Vivekananda decided to convert an old dilapidated house in Baranagar into a new monastery of math. The rent for the Barnagar Math was low and was raised through holy begging.

Thus the Barnagar Math became the first monastery of Ramkrishna order. Vivekananda and other disciples used to woke at 03:00 A.M. and practice intense meditation. During this time they were so absorbed in meditation and other rituals that they remained totally detached from the external world.

There had never been a spiritual leader an inspirer, a motivator and a monk-like Swami Vivekananda.

Swami Vivekananda (12th January 1863 – 4th July 1902) was an Indian Hindu monk and the chief disciple of Ramkrishna Paramhans. He revived Hinduism during the 19th century, introducing it to the world. He is also credit with conceptualizing the ideas of interfaith brotherhood and communal harmony.

Education and Interests of Swami Vivekananda

From a very early age, Vivekananda or Narendranath was interested in spirituality and used to meditate in front of the idols of Hindu Gods and deity images. Young Narendranath was also fascinated by the wandering monks and ascetics.

In 1871, Vivekananda was enrolled in Vidyasagar College in north Calcutta, at an age of eight. Later in 1877, he moved to Raipur with his family. Returning once again to Calcutta in 1879, he was the only student to obtain first-class marks in the entrance exam of reputed Presidency College.

Vivekananda was a devoted reader with interests in a wide number of subjects like literature, philosophy, history, and religion. Hindu scriptures like Vedas, Upanishads, Mahabharata, Ramayana, Bhagwad Gita, etc also interested him.

Trained in Indian Classical Music, Vivekananda routinely participated in sports and other physical activities. In 1884, Vivekananda completed a Bachelor of Arts Degree from the prestigious Christian College, Calcutta.

The principal of the Christian college William Hastie had written “Narendra (Vivekananda) is really a genius. I have traveled far and wide but I have never come across a lad of his talent and possibilities, even in German universities, among philosophical students. He is bound to make his mark in life”.

Swami Vivekananda had an excellent memory and speed reading abilities. There have been several occasions when Vivekananda had proved his exceptional qualities.  In a talk, he is known to have quoted three pages of Charles’s Dickens’s first novel Pickwick Papers, exactly as they were written.

In an argument with a Swiss national, he gave references to the Swiss history, which the Swede initially rejected, but later conceded to the argument.

Swami Vivekananda was a great spiritual leader, an ascetic who has revealed the true concept of Hinduism to the world. He had traveled extensively within India and to other parts of the world as well. Wherever he went, he fascinated his audiences with his vast knowledge and impressive memory. He had made many disciples, not only in India but also in countries like America and Britain among others.

Swami Vivekananda (12th January 1863 – 4th July 1902) was a Hindu monk who is credited with providing international recognition to the Hindu religion and philosophy. He introduced the Indian philosophies of Vedanta and Yoga to the world.  He was a chief disciple of Ramkrishna Paramhans, a 19th-century Indian mystic, and spiritual guru. Swami Vivekananda was also the founder of Ramkrishna Mission and Ramkrishna Math.

Swami Vivekananda was born as Narendranath Datta, on 12 January 1863 at his ancestral home in Calcutta. He was one of the nine siblings and his father Vishwanath Datta was working as an attorney in the Calcutta High Court. Swami Vivekananda’s mother Bhubaneswari Devi was a devout housewife.

As a child, he was quite naughty and always restless as described by his mother. She is also known to have once said that “I prayed to Shiva for a son and he has sent me one of his demons”; probably a reference to Vivekananda’s naughtiness.

Swami Vivekananda first came to know about Ramkrishna Paramhans during a literature lecturer at General Assembly’s Institution in Calcutta in 1881. Professor of English Literature, William Hastie was lecturing on a poem titled “The Excursion”, written by William Wordsworth. It so happened that during the lecture, the word “trance” had appeared in the poem. It was then that the professor told his students that they should meet Ramkrishna of Dakshineswar if they ever want to understand the true meaning of trance.

The first meeting of Swami Vivekananda with Ramkrishna occurred in November 1881 at a common friend’s house where Ramkrishna was delivering a lecture.

The second meeting which took place in early 1882 when Vivekananda went to Dakshineswar to meet Ramkrishna, proved to be a turning point in his life.

Though, Vivekananda initially rejected the ideas and philosophy of Ramkrishna as impractical and a kind of hallucination; he was impressed by the personality of Ramkrishna and started routinely visiting Dakshineswar.

After the death of his father in 1884, his family was literally forced into penury, and it was the time when Vivekananda came closer to Ramkrishna Paramhans as he found solace in the latter’s company.

Leader of the Monastic Order

In 1885, Ramkrishna Paramhans developed throat cancer and before leaving for heavenly abode, he gave his disciples ochre robes, forming his first-ever monastic order. During this time Swami Vivekananda was taught that “service to men was the most effective worship of God”.  Ramkrishna also asked his other disciples to consider Vivekananda as their leader, asking Vivekananda, in turn, to take care of others.

There had never been as great a spiritual leader in world history as Swami Vivekananda. He introduced the Hindu religion and philosophy to the world, giving it global recognition. His words have inspired millions across faiths, religions, and cultures. He toured throughout the length and breadth of India extensively, like a monk. His only possessions were a water pot, staff and two of his favorite books – Bhagavad Gita and The Imitation of Christ.