Intolerance is the unacceptable situation for people to accept the views, beliefs, or behaviour which differs from their own. We have provided below some essay on intolerance under various words limit in order to help students. Now-a-days, essays and paragraphs writing are common strategy followed by the teachers in schools and colleges. It helps teachers in enhancing student’s skill and knowledge about any topic. All the intolerance essay provided here are written in very easy and simple sentences. So, students can select any of the essays given below according to their need and requirement:

Long and Short Essay on Intolerance in India in English

Intolerance is the unwillingness of accepting beliefs, behavior or practices of someone different person related to other cast, religion or custom. It may give rise to the high level hate, crimes and discrimination in the society. It gives rise the property of refusal in the mind and heart of any person to refuse, disallow or deny something (action or practice) happening against his/her will or practice. It does not allow people to live with equality, indiscrimination, freedom, or other social rights. Intolerance in the society generally arises due to the cast, culture, gender, religion or any unbearable practice. 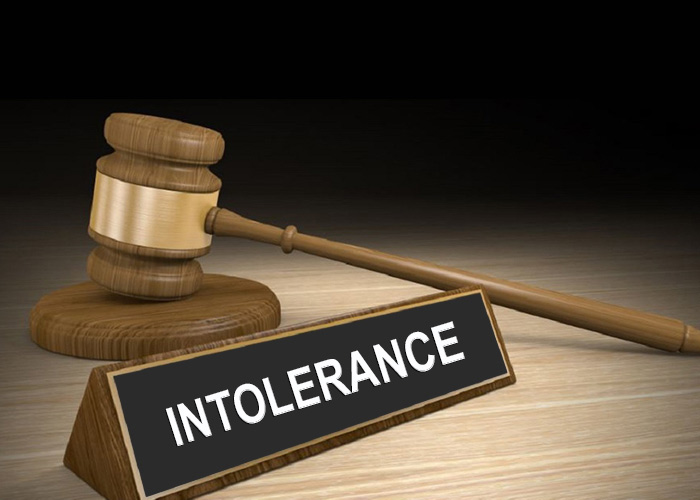 Intolerance is the act of refusal to accept, appreciate and respect any practices, beliefs, or opinions of the people of another group, religion, cast or custom. Israeli Jews and Palestinians are the best example of high degree of intolerance because of the various issues of identity, self-determination, security, statehood, etc. Intolerance between them is resulted in continue inter-group violence. On the other hand, tolerance is the quality which appreciates equality in the society even after the existence of diversity. It appreciates people for the ability to live as well as let others live whether the person belongs to any religion, cast or custom.

Intolerance disallow a person to go together, follow or bear the practices or opinions by the people of different religion, cast, or nationality from one’s own. According to the William Ury notes, “tolerance is not just agreeing with one another or remaining indifferent in the face of injustice, but rather showing respect for the essential humanity in every person.”

Tolerance is considered as the good quality of a man and it is most necessary to make a society. However, intolerance leads a person, people or society to the worst disaster. If we have a look in the history and mythology, we will see variety of horrible acts of intolerance. People develop the feeling of jealous and then intolerance just because of simple things like someone cannot bear the importance of his/her close one’s in the eye of most effective person. One of the historical intolerance acts is Aurangzeb killed many Hindu people under feet of elephants as he developed intolerance to the Hinduism, etc. Some people quarrel to each other as they cannot tolerate each other’s behaviors, beliefs and practices. Intolerant people become unable to take right decision to someone just because of intolerance to hear the views of someone different.

Intolerance is a bad quality which leads a person, society or country towards disaster. On the other hand, people with tolerance can live in the society with equality even after being different in cast, religion, opinion, and practice. Tolerance is a power which makes people able to do justice by hearing and accessing the different views of others. Democratic countries have tolerance as an indispensable quality. Being a tolerant person helps in tolerating any bitter condition in the surrounding areas. Habit of tolerance is the individual culture of every citizen in India. Tolerance is an essential quality of painless life. India is a democratic and developing country where people develop habit of tolerance from their childhood under the guidance of elders so it is rare to see intolerance in India.

What is Intolerance in India

We cannot say that there is intolerance in India as this country is the best suited example of an idiom called “Unity in Diversity”. It is the fast growing country because of its unique quality of having unity in diversity. It is the country where people of different cast, creed, religion, custom, culture, tradition and practice are living together for years without any difference. They celebrate their fairs and festivals with great enthusiasm and without any interference of people of different group. They have proper understanding and respect to each other’s beliefs, custom and practices. Citizens of India have the quality of tolerance which provides them ability to live and let others live.

A statement of a Bollywood actor, Amir Khan, about the growing climate of intolerance in India was very surprising to everyone as he has made such a serious comment over an unfortunate incident. India is a country where no one can blame that people here are developing intolerance as everyone has proper understanding to each other’s religion and practice.

How Intolerance affects the Society

Intolerance (especially religious intolerance) separates people living in the society and it acts as divider of the nations. It creates the condition of disrespect, enmity and war in the society between people of different cast, religion, opinions and practices. It puts neighbor against neighbor by creating disbelief to each other.

The situation of intolerance may occur because of economically depressed and politically charged situation among the people of different groups. In such situation, people find hard to tolerate those different from themselves. It harms everyone badly and most importantly the nation. The country where intolerance exists may be the home of discrimination, repression, dehumanization, and violence.

Intolerance is the separation of unity which creates the condition of dislike, refusal and quarrel among the people of various groups. Whereas, tolerance appreciates unity in diversity (India is a best suited example) and develops understanding to live equally. Tolerance is the ability which develops positive attitude in the people’s mind towards those with different religions, practices, opinions, nationality, customs, etc. Intolerance is the condition of failure which motivates people to dislike the practices, opinions and beliefs of people related to another group. For example, a high degree of intolerance exists between the Israeli Jews and the Palestinians. Intolerance gives rise to the inter-group violence in the society.

Reasons of Intolerance in Indian Society

Intolerance arises in the society because of various reasons. Generally religious intolerance arises in the society which divides the nation. It creates the condition of war by setting neighbors against neighbors. Intolerance may arise between individuals because of the absence of their own experiences. Generally they make their opinions to one another on assumptions which get influenced very easily by the positive or negative beliefs of closest or most influential ones in life.

Individual attitudes towards other person of different group also influenced very easily by his/her images in the media. Bad education system based on the myths can also dehumanize students against other cultures instead of promoting cultural understanding and tolerance among people for diversity and differences in the society. Tolerance is the quality which motivates people to live happily and let others live.

Intolerance is the condition of refusal of beliefs, opinions, and practices of people of different groups. Growing tolerance in the society drives different groups apart by creating a sense of denial in any way. The best example of intolerance in the society is separation between black and white South Africans in the South Africa. There is a huge level of social distance between these two groups which gives rise to the inter-group resentment and hostility.

Intolerance is a dangerous and unacceptable quality which should be suppressed to grow in the society. It destroys the growing power of any country by setting people against people of different groups. People living in the intolerant society groups can do aggressive attack in order to express their denial to the opinions, practices, and behavior of other people related to different group. Intolerance can be religious, racial or other types however all badly affect the nation growth and development. It is an international problem because of the religious, cultural, traditional, customs, or way of thinking differences of people. It is the main cause of war among people or nations. Good education system, developing tolerance and agreement are better ways using which the problem of intolerance can be solved to a great extent.

Intolerant people never accept someone different which has been the main issue since ancient history all around the world. Intolerance makes people angry and violent to each other (people of various cast and religion) very easily to something they cannot tolerate in anyway. Good education system and tolerance make them able to know how to get control over their intolerance. The practice of tolerance can be practiced from the school age of kids. They should be taught to accept differences in the society.

Intolerance worries people, society and nation as it creates violence among people of different groups. It causes exclusion of those who are different and intolerable such as existence of non-Muslims in the Muslim state or its opposite. Intolerance makes human beings narrow mindedness and does not give chance to thing positive about anything happening in different way in the society or nation. It has high level destroying capacity and very dangerous for the nation where it exist. So, it is better to stop it from growing in any society or country instead of reducing its percentage.

How to Deal with Intolerance

Intolerance should be discouraged and tolerance should be encouraged among people. Tolerance can be promoted by using various methods. Intimate inter-group contact enhances personal experiences to each other and reduces intolerance. Intimate inter-group contact should be continued to make it effective and useful. Dialogue mechanisms can also be effective for enhancing communication on both sides. It helps people to express their needs and interests. Media should select positive images to promote tolerance and understanding towards cultural sensitivity. Education is the best way to promote tolerance and peaceful coexistence in the society. Students should be provided tolerant environment in the school so that they can respect and understand different cultures. Students can better develop the inter-cultural understanding in the tolerant environment.

International Day for Tolerance and Peace