We have provided variety of essays and paragraphs on violence against women in India for the school students. Students are generally assigned this topic to write full essay or only paragraph during exam time or essay writing competition within the school or outside the school. All the essays are written using very simple and easy words to fulfill the students needs.

Violence against women in India is going side by side to the technological improvement in modern world in the country. Violence to the women is of various types and can happen at any place like home, public place or office. It is the big issue related to the women which cannot be ignored as it is hindering almost one half growth of the country. Women in the Indian society have always been considered as the things of enjoyment from the ancient time. They have been victims of the humiliation, exploitation and torture by the men from the time of social organization and family life. 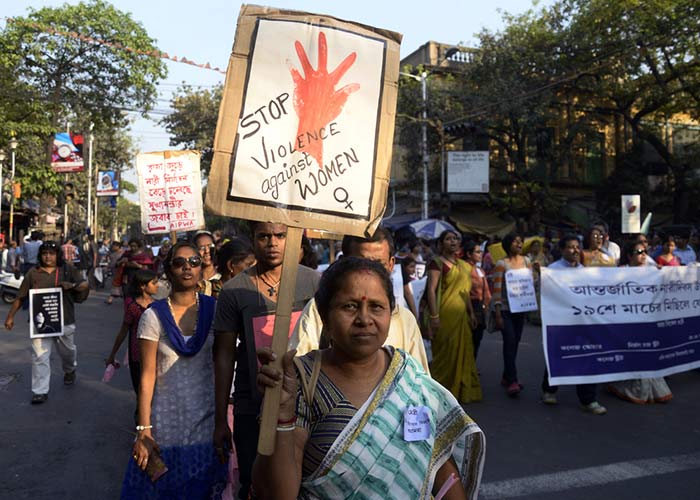 From the origin of social life in the country various centuries came and gone, time has changed people’s mind and environment a lot, however violence against women is not seems to change a little bit. Time is the real eyewitness of all the sufferings (like sex discrimination, exploitation, oppression, aggression, degradation, humiliation, etc) bear by the helpless women. Women are so helpless in the Indian society where many female goddess are worshiped. In the Vedas, women are glorified as mother means one who can create and nourish a life. On the other hand, they have found themselves suppressed and subjugated by the men in the patriarchal society.

India is a traditional male-dominated country where women have to face various violence in the society from the ancient time. As the world is leading in the technological improvement, advancement of material prosperity, etc; the rate of unnatural sex and violence with women is also on the way. Rapes and brutal murders have been so common now-a-days. Other violence are like harassment, assault, and chain-snatching, etc have been involved in the daily routine in the modern Indian society. Violence against women has grown to a great extent in the free India. Dowry deaths, murder, bride burning, etc are giving rise to other violence in the society. Simultaneous increase in violence against women is hindering the social, economical, political, and cultural progress in the country.

The continuous practice of dowry system in the society proves that the violence against women can never be end. It is a complex phenomenon covering several dimensions of violence. It has reduces the status of young girls in the society as well as lowers their dignity. At the time of marriage, if a bride do not bring adequate dowry with her, she would really be at high risk of maltreatment after the marriage. Thousands of girls are bring victims of this social devil on daily basis.

Violence against women in the country is getting more frequent and alarmingly with huge sound. It is creating pressure and and heavy responsibility over the shoulders of social workers. However, there is urgent need for women to be empowered and responsible to themselves in order to understand all the rights and take benefits.

Even after happening such type of cases regularly in the society, it is not going to change the societal norms against women. It is going very complex and deeply rooted in the Indian society even after increasing education level of the people. Violence against women happens because of inefficient legal justice system, weak rules of law and male dominated social and political structures.

According to the research it is found that violence against women begins at home in the early age especially in the rural areas by the family members, relatives, neighbors, and friends.

Situation of the women varies all over the country according to the place, culture and tradition of people. Women in the north-eastern provinces and south have better position than other regions. Because of the practice of female infanticide, the number of girl child has been very less in comparison to the male child (almost 940 women to 1000 men according to the 2011 census). Such a huge decrease in the percentage of female child is because of the sex-selective abortions and negligence of young girls during infancy.

According to the National Crime Records Bureau, women in India are very much unsafe in their marital home. Other common violence against women in the society are domestic violence, acid attacks, rape, honor killings, dowry deaths, abduction, and brutal behavior by husbands and in-laws.

Women in India have been victims of violence from many years in almost all the societies, regions, cultures and religious communities. Women in the Indian society have to bear variety of violence such as domestic, public, physical, social, emotional and mental. Violence against women is clearly seen in the history to a large extent which is still getting practiced without any positive change.

Women in India were enjoying a quite comfortable position all through the Vedic period however, the condition got declined gradually because of the practice of violence against women all through the country. On the other hand, with the increasing level of violence against women they started losing their educational, social, political, economic, and cultural opportunities in the society.

They became restricted to live their normal lifestyle like healthy diet, wishful dress, marriage, etc. It was huge effort of male dominated country to make women limited and obedient. They started being enslaved and prostituted. Women in India started being used as commodities for the men to perform different functions of daily routine. There is a culture in the society for women to understand husband as a God, keep fast for their wellness and be depended on husbands.

Widows were restricted to marry again and forced to follow sati pratha. Men understood their rights to beat women with rope or a bamboo stick. Violence against woman took a very fast speed when young girls were forced to serve as a Devadasi in the temple. It given rise to the prostitution system as a part of the religious life.

The fight of two major cultures (Islam and Hinduism) in the medieval period has increased the violence against women to a great extent. Young girls were forced to marry in the very early age and follow purdah system in the society. It made them isolated from almost whole world except their husband and family. Polygamy with strong roots was also started in the society and women lose their right of having unshared husband’s love.

In order to reduce the number of offenses and crimes against women in India, another Juvenile Justice (Care and Protection of Children) law, 2015 has been made by the Indian government. It is done so to replace the earlier Indian juvenile delinquency law of 2000 especially after the Nirbhaya case during which an accused juvenile was released. In this act, the juvenile age has been reduced by two years means 16 years from 18 years in cases of heinous offenses.

The National Crime Record Bureau (NCRB) of India has the responsibility of publishing the crime data including violence against women. The last annual report released by NCRB in August 2018, has indicated towards an increased rate of violence against Indian women.

Cases of sexual violence against women in India have jumped up by over 10% than the preceding years and rape accounts for 12% of all the crimes committed against women. Delhi stands highest for reported rape cases at 30% followed by Sikkim at 22%.

However, it must be kept in mind that these figures are not actual as many cases of rape and domestic violence go unreported.

Types of Violence against Women

Sexual Assault on a woman refers to the situation where a person intentionally makes inappropriate physical contact with a woman without her consent or forces her into a sexual act. It is a sexual violence and includes crimes like – rape, drugs induced sexual assaults, child sexual abuse and groping.

Honor killing refers to the murder of a family members who has supposedly brought shame to the family by going against the family’s will on issues like arranged marriage, by choosing a partner from other caste or in some cases by committing adultery.

Throughout India cases of young girls going missing are continuously reported. These girls are supposedly lured on the pretext of securing a job or earning money and send to other states and subsequently forced into prostitution.

Causes of Violence against women in India

Indian society is male dominated society where women don’t have the rights to make major decisions related to the family. Moreover, researches revealed that almost 60% of males in India think that women in the family must be beaten from time to time. This societal setup always keeps women at a vulnerable position.

Domestic violence committed on a woman has a tendency to be carried over to the next generation. A child who watches his father physically abusing his mother is most likely to do the same to his wife when he grows up. Nuclear families have more reported incidents of violence against women as there is no elder person to intervene and settle the matter.

Police vigil must be increased in all the areas, especially in the secluded areas during night. Police presence significantly reduces the chance of a woman getting assaulted or harassed by others on the road. Police officers must be deployed at crowded places like markets, as the women at these places are more susceptible to crimes like eve teasing or groping.

Many acts of sexual violence against women are committed in trains or buses mainly during late hours. Offenders take advantage of the secluded vehicle and absence of police personnel. There is a need to deploy at least one woman police constable in buses or rail coaches during late night hours.

Violence against Indian women is a blot on the nation and the society as well. As long as the Indian women are subjected to violence, the international image of India is also going to suffer. Also, incidents of domestic violence, sexual assaults and other similar crimes on women will continuously damage Indian society and obstructs national progress. Therefore, it is imperative to take stringent counter measures to diminish any kind of violence against Indian women.