Dussehra is a ten days and nine nights long Hindu festival. It marks the victory of goodness over evil power such as victory of Rama over Ravana and victory of Durga over Mahishasura. Dussehra is a major Indian festival celebrated by the Hindu community. Celebrated on the tenth day of Hindu calendar month of Ashvin it also marks the end of Navratri festivities. The festival commemorates victory of Lord Rama over Ravana; hence it symbolizes the triumph of good over evil.

It sends a message that in a battle of right and wrong, righteousness always triumphs victorious. The festival of Dussehra is mostly celebrated outside the houses, in community places, in form of fairs ranging from small to large.  The main attraction of fair is a large effigy of Ravana, which is dramatically burned down to ashes by a member of public depicting Lord Rama. The crowd bursts into cheer shouting “Jai Shree Ram”.

Long and Short Essay on Dussehra in English

Dussehra is a most important Hindu festival celebrated every year by the Hindu people all over the country.

It is a religious and cultural festival which every kids and children must know.

In the schools and colleges, essay writing is a common and most effective way to enhance knowledge and skill of the students.

We have provided here various paragraphs and essay on Dussehra for the students. They can select any Dussehra essay given below:

The festival of Dussehra is also known as Vijayadashmi and celebrated with great joy and enthusiasm by the Hindu people all over the India. It is one of the most important religious festivals of the India. According to the historical beliefs and most famous Hindu scripture, the Ramayana, it has been mentioned that Lord Rama had performed a chandi-puja (holy prayer in order to get blessings of the Goddess Durga Mata to kill the powerful demon, Ravana.

Ravana was ten-headed demon king of the Sri Lanka who had kidnapped the wife of Lord Rama, Seeta to take revenge of his sister, Suparnakha. From then, the day Lord Rama killed Ravana was started celebrating as the Dussehra festival. 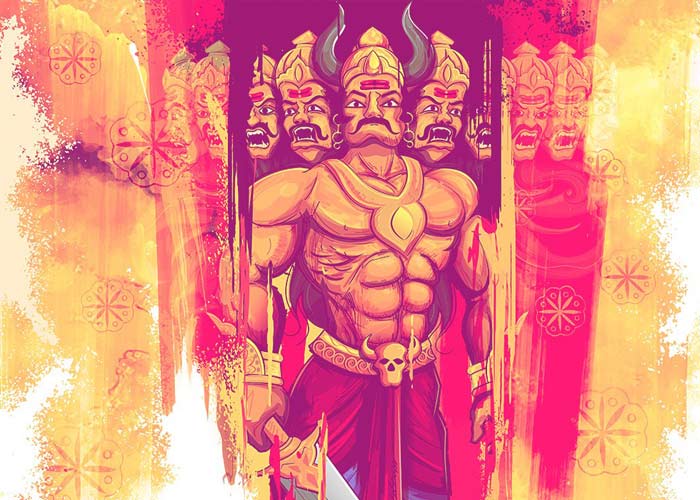 The festival of Dussehra (also called Vijayadashmi) is celebrated every year by the Hindu people all over the country. It falls every year in the month of September or October before twenty days of Diwali festival. It is celebrated by the Hindu people in the happiness of winning of Lord Rama over the demon king Ravana. The festival of Dussehra indicates the victory of truth over evil power. The day Lord Rama got victory by killing the demon king Ravana started celebrating as the Dussehra festival by the people from ancient time.

In the ancient time, Prince Rama was exiled of his kingdom of Auyodhya for 14 years to the forest. During the last year of his exile, Ravana kidnapped his wife, Seeta. It is said that Lakshman had cut the nose of sister of Ravana that’s why Ravana kidnapped Lakshman’s sister-in-law, Seeta. People celebrate this festival with lots of joy and faith.

Religious people and devotees keep fast for the whole day. Some people keep fast to only first and last day (9th day) however some people keep fast for all nine days and worship Goddess Durga to get blessings and power. On the tenth day people celebrate Dussehra in the happiness of victory of Lord Rama over the demon king, Ravana. The festival of Dussehra falls in the month of last September or October every year two weeks before the festival of Diwali.

There are different customs and traditions of celebrating Dussehra festival in various regions of the country. Somewhere it is celebrated for whole ten days and priests of the temple recites mantras and stories from the Ramayana in front of the big crowed of the devotees. Somewhere a big fair of Ram Lila is staged for several days or a month.

Dussehra is one of the most significant festivals of the Hindu religion. It is a ten days long festival celebrated all through the country by the Hindu people with great enthusiasm. First nine days involves the worship of goddess Durga that’s why called as Navratra festival. On the tenth day people celebrate Navratra by burning the cartoon of the demon king, Ravana.

The festival of Dussehra falls in the month of September or October just two or three weeks before the festival of Diwali. This festival is celebrated by worshipping the Hindu Goddess Durga. Devotees of the Lord Rama and Durga keep fast for the first and last day or whole nine days and worship the Goddess Durga. Nine days or Navratra is also known as Durga puja when goddess Durga is worshipped in her nine forms.

People celebrate Dussehra festival means tenth day as Vijay Dashmi by organising a big fair or Ram-Lila where they show the dramatic life history of the Lord Rama. The Ram-Lila fair indicates the legends behind celebrating the Vijay Dashmi which are Lord Rama and Ravana. It shows the whole history of kidnapping of Seeta, victory of Rama and defeat and kill of demon king, Ravana and his son, Meghnath and brother, Kumbhkaran.

Dussehra is the most significant festival of the Hindu religion celebrated all across the country. It falls every year in the month of September or October twenty days earlier to the Diwali festival. The celebration of Dussehra indicates the victory of Lord Rama over demon king Ravana. Lord Rama symbolizes truth and Ravana represents evil power. It is a great ceremonial and religious festival celebrated by the Hindu people with the worship of goddess Durga. The tradition and culture of celebrating this festival varies from region to region in the country.

It is a ten days long festival, nine days of which is celebrated by worshipping the goddess Durga and tenth day as Vijay Dashmi when people celebrate the victory of Lord Rama over the demon King, Ravana. A huge preparation for this festival takes place which starts few days earlier to the exact date. A big fair is held for whole ten days or a whole month where people from far regions come to make shops and stalls of all things necessary for the people.

It takes place in the Ram-Lila ground in every society or community where a huge fair is held with the dramatic show of legends of Dussehra for all days. Paper models of the Ravana, Kumbhkaran and Meghnath are prepared in the Ram Lila ground and real people play the role of Rama, Seta and Lakshman.

Everywhere lights are on and whole environment becomes full of sound of firecrackers. People and kids used to see the fair including ram-lila whole night. Various important events of the life of Lord Rama are demonstrated by the real people in the Ram Lila. Thousands of men, women and children of the nearby regions get together in the Ram Lila ground to enjoy the show.

Dussehra festival is one of the most significant and longest festivals of the India. It is celebrated every year with full enthusiasm, faith, love and honour by the people of Hindu religion all over the country. It is really the great time to enjoy by all. Students also get holidays for many days from their schools and colleges to fully enjoy the festival of Dussehra. This festival falls two or three weeks earlier to the Diwali every year in the month of September or October. People wait for this festival to occur with huge patience.

India is a country which is very famous for its culture and tradition, fair and festivals. It is a country of fairs and festivals where people celebrate and enjoy every festival with great joy and faith. The festival of Dussehra has been declared by the government of India as the gazetted holiday to allow people to fully enjoy this festival as well as giving importance to the Hindu festival. The meaning of Dussehra is the victory of Lord Rama over the ten headed demon king Ravana. The real meaning of the word Dussehra is the defeat of ten headed (Dus head) demon on tenth day of this festival. Tenth day of this festival is celebrated by burning the Ravana clones by the people all over the country.

There are many myths related to this festival according to the customs and traditions of the people in many regions of the country. This festival was started celebrating by the people of Hindu religion from the day Lord Rama had killed the demon king Ravana on the day of Dussehra (means 10th day of Ashwayuja month of Hindu calendar). Lord Rama had killed Ravana because he had kidnapped the Mata Seeta and was not agree to return her to the Lord Rama. Lord Rama had won the war with Ravana by the help of younger brother Lakshman and Vanar soldier of Hanuman.

According to the Hindu Scripture, Ramayana, it is mentioned that Lord Ram had performed Chandi Hom to make goddess Durga happy and get blessings. In this way Lord Rama, got victory by knowing the secret of Ravana’s killing on 10th day of the war. Finally, he retained his wife Seeta safely after killing the Ravana. Dussehra festival is also known as the Durgotsav because it is considered that on the same day another demon called Mahishasura was killed by the Mata Durga on the tenth day. A huge fair of Ramlila takes place in the Ram-Lila ground where people from nearby regions come to see the fair and dramatic representation of the ramlila.

Speech on Diwali for School Students

Essay on How to Prevent and Stop Climate Change