Global warming has affected the living of people and society to a great extent. It is more dangerous than a demon, we should know about and get together to solve it. Students are generally given this topic in the schools to write some lines or paragraphs or essays in the classroom or during any essay writing competition. So students, don’t worry, we are here for you to help you all in participating and getting success in such competitions. You are at the right place, go ahead.

Essay on Effects of Global Warming

The effect of global warming has become very clear now which is affecting the natural environmental balance and social life of the people. Global warming has impacted life to a great extent and disturbed the environmental cycles. It is going worse day by day. It has affected the sea level and caused to rise in the sea level which in turn has become the terror to the finish of the whole world.

Global warming raising the overall temperature which causes glaciers and ice caps to melt and thus the water level is expanding continuously. According to the Intergovernmental Panel on Climate Change of Third Assessment Report, sea level has been estimated to rise around 88 centimeters till the end of this century. 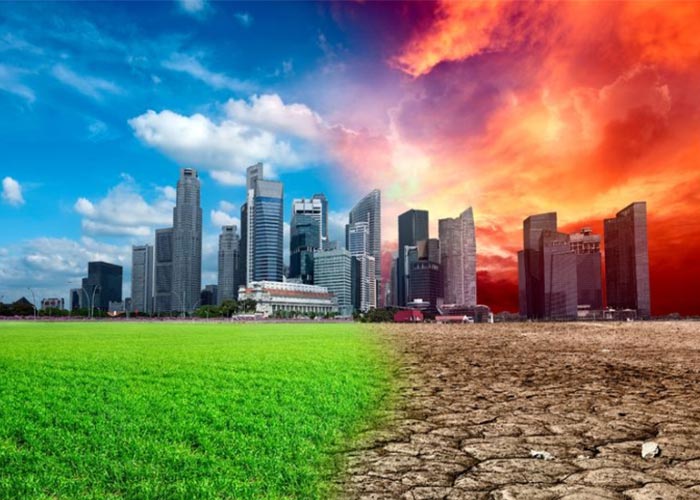 Global warming is increasing the risk of ocean acidification. The percentage of carbon dioxide gas (one of the main greenhouse gases) is increasing in the environment and getting mixed with the seawater causing ocean acidification. It is very hazardous to ocean life, especially for the coral. Global warming is affecting weather by making climate so hot or cold and becoming the reason for hurricanes and earthquakes frequently.

Global warming has become the main social problem and the global environment. Earth is considered as the only planet where life is possible because of the presence of the water and oxygen however increasing the amount of carbon dioxide gas here increasing the chance of making it like other planets in the universe without life.

It is said that global warming is a gradual process however it seems that it is increasing very fast as its effects are becoming so visible. People are feeling its effect on their day to day living. It is very visible that the winter season has become decreased and the summer season has become increased. The whole environment has become so hot and itchy. Global warming makes us feel that it is far-reaching, long-lasting and devastating consequences for this planet. It is gradually heating the earth’s surface, the ocean’s surface and atmosphere. It has become the topic of debate on the international level in the scientific as well as the common community.

Bad human activities have been involved to a great level in promoting the effects of global warming. Burning of fossil fuels, oils, etc is pumping the rise of carbon dioxide (CO2) gas, methane gas and other greenhouse gases in the atmosphere causing heat and temperature. Intergovernmental Panel on Climate Change (IPCC) has stated that there is a big link between human activities and global warming. And also stated that it needs international level participation by the government of the countries to solve it globally and reduce its effects.

The melting of the ice (polar ice caps and mountain glaciers) has been started very fast. Lakes, rivers, and oceans surface are warming rapidly, animals are migrating because of increasing heat, and plants are changing means the leaf-flush in the spring season to fall in autumn season is longer. It has been recorded by the National Oceanic and Atmospheric Administration that the global temperature has been increased all around the world by about 1.8 degrees Fahrenheit (means 1 degree Celsius). Weather and climate conditions are changing extremely where hurricanes, storms, cyclones, typhoons, droughts, blizzards, rainstorms, etc are the results of it.

Global warming is a hazardous phenomenon going ahead continuously all over the world. It has been irritated by the many human activities. The condition of the environment and society is getting worse and worse. It is an international disaster affecting humanity in all facets of modern human life. One of the main effects of global warming is the continuous heating up of the atmosphere. According to the statements of scientists, there is a direct relation between the increase in CO2 gas in the atmosphere and the increasing temperature of the earth. According to the IPCC report of 2007, it has been noted that the warmest years have been started since 1992.

The increasing heat and global temperature cause the melting of the ice caps of poles and glaciers. Melting ice all across the world increases the sea levels by 1.88 mm per year from the year 1961 however it has increased by 3.1 mm per year from the year 1993. In the coming years, it would increase to a great extent and call various natural disasters to come more often. Melting glaciers are continuously changing the chemical compositions and temperature of the water. Increasing water temperature has disturbed the sea life and forcing the sea animals to migrate or die. It seems that in the current years the Coral life will be wiped out. Some of the sea mammals (polar bears and penguins) are migrating or dying out because of the changing icy habitat.

Regular melting of the ice caps is increasing the greenhouse gas levels such as carbon dioxide, methane and other greenhouse gases which are trapping heat from the sun and warming the whole environment. Melting ice bodies are greatly contributing to the albedo effect which is directly affecting the geographical life. The important function of the ice bodies is to reflect back the extra sunlight and causing the cooling effect of the earth, however, if they are melting who one performs this function. It has forced the weather patterns to change and called various natural disasters like storm, drought, flood, cyclone, typhoons, thunderstorms, hurricanes, volcano, tsunami, rainstorms, etc.

Earth warming on a regular basis has increased the chance of increasing pests and other disease-causing insects like mosquito, culex, dengue mosquito, etc. All the effects of global warming have deadly affected human lives both physically and mentally. So, it requires some urgent basis solutions to be solved in a few current years.

Global warming has raised the earth’s surface and atmospheric temperature resulting in effects like extreme climate changes, Arctic sea ice decline, sea-level rise and warming of oceans along with others. Some of the most significant effects of global warming are described below-

Global warming has resulted in extreme climatic conditions all over the world. Unexpected changes in the monsoon patterns are being witnessed. Winters are getting colder and summers are registering higher temperatures never recorded before. Occurrences of drought, famine, and storms have increased in the gone decade. Though the climatic variations vary from place to place, it is more evident in some places than the others.

Global warming results in the melting of snow, quickly than it should and results in a decreased snow cover. Satellite images have revealed that global warming has caused reduced snow cover over the northern hemisphere, consequently resulting in raised sea level and hotter climate. Similarly, the ice sheets in Greenland and Antarctic have decreased considerably.

Global warming also results in warming of the ocean. Though the recorded growth in the ocean’s temperature is low than the earth’s surface temperature, nevertheless, it affects marine life up to a larger extent. Many marine species are sensitive to temperature changes and ultimately die because of it. The most vulnerable ocean organism to temperature change is coral.

Global warming has led to the melting of glaciers, throughout the world. The rise in the earth’s average temperature heats up the glaciers, which melt, leading to other climatic and geographical effects. Global warming has resulted in glacier retreat in the Alps, Andes, Rockies, and Himalayas. Melting glaciers have led to raised water levels of oceans and rivers, increasing the possibility of floods.

Heated water has a lower gas absorbing capacity than colder water. Hence, when the ocean water temperature is raised by global warming, it emits oxygen, rather than retaining it. This, in turn, has disastrous effects on aquatic species that rely on the supply of oxygen; thereby, resulting in a decrease of fishes, turtles, etc.

Global warming results in unexpected climatic changes and an increased possibility of floods due to raised sea levels. These effects all together result in poor crop production, especially in the low lying agricultural areas. The effect of global warming on agriculture production varies from place to place and largely depends on the condition of rainfall.

Global warming is causing extreme events at different locations throughout the world. These extreme events include extreme weather, hurricanes, drought, and tsunamis. An increase in the earth’s temperature causes unusual weather patterns resulting in hurricanes and cyclones. Also, raised water level results in floods and famine.

Many forest fires in the recent past have been attributed to global warming. Global warming has subsequently resulted in raised climatic during summer and extreme heatwaves, increasing the possibility of fire.

Global warming is caused due to human-induced factors and has the potential of causing havoc on the planet in many ways. Moreover, the intensity of global warming is increasing with every passing year and if the situation continues, it will have unimaginable disastrous consequences. Only humans have the power to reverse the change or at least to minimize their effects, and every possible effort must be made in this regard.

Essay on Uses of Internet

Music and its Importance Essay