Long and Short Essay on Republic Day of India 2020

In India, the 26th of January is celebrated as Republic Day every year because the Constitution of India came into force on this day. It is celebrated as the national festival of India which has been declared as a national holiday. Gandhi Jayanti and Independence Day are the other two national holidays of India. On the 26th of January in 1950 our country became the complete Democratic Republic after reinforcement of the Constitution of India in the Indian Parliament.

How Republic Day is Celebrated

On this day a great Indian army parade takes place which generally starts from the Vijay Chowk and ends at India Gate. Indian Armed Forces (Army, Navy and Air Force) salute the President of India while parading on the Rajpath. The parade also showcases the capabilities of the Indian Armed Forces exhibiting the advanced arms and warfare of the country.

It is followed by the tableau or ‘Jhanki’ of each state displaying their culture and traditions. Students celebrate this day in the schools and colleges by participating in various events like a parade, flag hoisting, speech competitions, plays, and various other cultural programs. 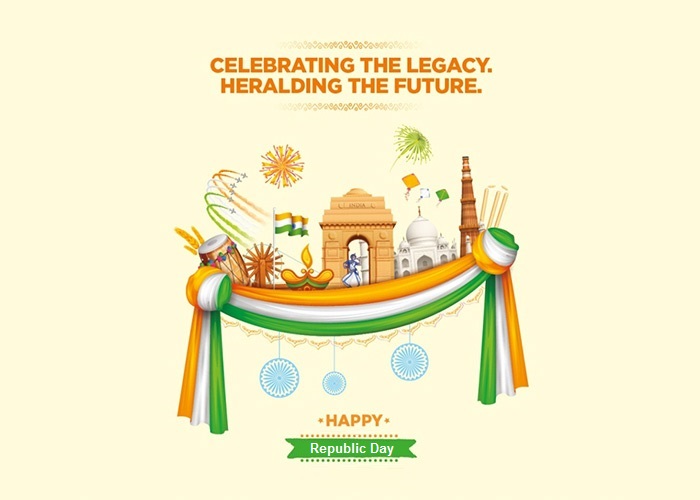 Republic Day is the national festival of India which reminds us about the sacrifices of our great leaders and freedom fighters who did not think about themselves and their families and happily sacrificed their lives for the nation. The democracy which we have received should be valued by everyone and should not be taken for granted. Everyone should contribute their bit for the development of the nation and spread peace, love, and harmony.

26th January is known as Republic Day which is celebrated by the people of India every year with great joy and enthusiasm. It is celebrated to honor the importance of being the Sovereign Democratic Republic which was declared after the enforcement of the Constitution of India in 1950 on the 26th of January. It is also celebrated to enjoy and remember the historic Independence of India from the British Rule.

Schools organize various cultural programs on the occasion of Republic Day. Students participate in these programs with great zeal and enthusiasm. Various competitions like essay writing, speech, drawing, and painting, etc are conducted in all the educational institutions. Students also conduct plays and skits showing the Indian independence struggle of freedom fighters.

The government of India organizes a major event every year in the National capital, New Delhi where flag hoisting events, Indian Armed Forces parade and various other activities are held in front of the India Gate. People start to assemble at Rajpath in the early morning to witness this great event.

A parade of all three wings of Indian Armed Forces starts from the Vijay Chowk which also displays the advanced warfare capabilities of the country. Military Bands of all the regiment, NCC Cadets and ex-army men also take part in the parade. Tableaus from all the states are also displayed after the parade showing the rich tradition of India. Folk dances and various stunts are also exhibited by the participants and army personnel on Rajpath.

Republic Day is not just a national festival but it is a celebration of democracy and independence. This is the day when we remember our freedom fighters and thank them by paying tribute to them for their immense sacrifice. It is because of them that we are living in a democratic nation and breathing in an independent country.

Our motherland, India was a slave under British rule for long years during which Indians were exploited and forced to follow the laws made by British rule. After long years of struggle by our great freedom fighters, finally, India became independent on the 15th of August in 1947. Around two and half years later the Indian Government implemented its own Constitution and declared India as the Democratic Republic on the 26th of January in 1950. The declaration of India as the Sovereign Democratic Republic made its citizens celebrate the 26th of January as a Republic Day every year to commemorate this great day.

Republic Day marks the remembrance of the day when the constitution of India came into force. The importance of this day could not be ignored as this was the day when India became a republic and where the government is for the people, of the people and by the people. Celebrating Republic Day every year is a great honor for the people living in India as well as abroad. It is the day of great importance and celebrated by people with great joy and enthusiasm by organizing and participating in various events. People wait for this day eagerly to be part of its great celebration.

Preparation work for the republic day celebration at Rajpath starts a month before. A major celebration arrangement in the national capital, New Delhi and state capitals takes place all over India. Celebration at Rajpath, New Delhi starts with the National Flag hoisting by the President of India and singing of the National Anthem. After this, the Indian Armed Forces parade, state-wise ‘Jhankis’, march-past, awards distribution, etc activities takes place.

On this day, the air is filled with the scent of patriotism and we can hear the sound of patriotic songs and national flag flying high everywhere. Students of schools and colleges are very keen to celebrate this event and start the preparation around a month before.  Almost every Indian citizen gets ready early in the morning to watch the celebration and parade at Rajpath, New Delhi on their television. National flag flying high on every house is very common on this day when people forget their personal issues and celebrate this national festival with a sense of nationalism and togetherness.

Republic Day is not the only day when we should show our patriotism towards our nation instead it should be showcased in our daily routine. We should strictly follow our fundamental duties and respect the constitution of our country then only we can help our country to become a developed nation where everyone lives in prosperity, peace, and harmony and that will be the real tribute to our freedom fighters.

26th January 1950 was the day when the Constitution of India came into force. This was the day when India turned to a republic country after the British colonial rule of 300 years. Since then we commemorate the day by celebrating the Republic Day on 26th January every year.

The Constitution of India, which is also regarded as the supreme law of our country was framed by Dr. B.R. Ambedkar who was the chairman of the constitution drafting committee. The hard work and intelligence of Dr. Ambedkar and the members of the drafting committee helped our nation to get our very own constitution which declares India as a Sovereign, Socialist, Secular, and the Democratic Republic nation.

Republic Day has importance in every heart of an Indian citizen. This is one of the national festivals of India which embarks a sense of patriotism in everybody’s mind. This is one of the occasions which helps to introduce the younger generation to our great Indian history and culture. This is the day when we remember our great leaders and freedom fighters who sacrificed their lives for the country.

Republic Day also teaches us the importance of unity and how it helped in the Indian freedom struggle to defeat the much powerful British Empire. Mahatma Gandhi’s non-violence movement teaches us that how we can defeat a much powerful enemy without lifting a single weapon or shedding a drop of blood. Republic Day also makes us remember that all the citizens of the country are equal for the constitution and there is no discrimination on the basis of caste, creed or religion.

The Republic Day is celebrated across the country with full enthusiasm, zeal, joy and of course, with the real sense of patriotism. The celebrations in schools are very common sightings on this day where children are smartly dressed up carrying the tricolor and wearing the badges of our great freedom fighters. Flag hoisting ceremonies, cultural programs, speeches, various competitions, etc are conducted in all the schools as well as in the government and private offices.

The President of India addresses the nation on the eve of Republic Day on 25th January and is telecasted on all the radio and television channels. The main celebration takes place in New Delhi at Rajpath near India Gate on 26th January.

The Republic Day celebration starts with the hoisting of the national flag by the President of India at Rajpath in the presence of an honorable Chief Guest. After which the national anthem is sung and tribute is paid to all the martyrs who sacrificed their lives for the country. President also presents the gallantry awards to the civilians and soldiers who displayed outstanding courage and bravery.

The picturesque event of the Republic Day celebration starts with the parade of the Indian armed forces which is presided over by the President of India. He also takes the salute of the parade being the Commander-in-Chief of the Indian Armed Forces. The parade also showcases the military capabilities of our country ranging from tanks to missiles and fighter jets to guns. There are also various mind-blowing performances by the Indian Air Force, Navy and military personnel. It is followed by the colorful tableau from various states which exhibits the culture and traditions of the state.

Beating the Retreat is an integral part of the Republic Day celebration and also an age-old traditional ceremony after the Republic Day. The ceremony is held on 29th January at Vijay Chowk, New Delhi. Military Bands, Trumpets, Drums, etc from various Army regiments perform in sync playing various patriotic tunes. Beating the Retreat also marks the official closing of the 4 days long Republic Day celebration with a positive note.

Republic Day instills a sense of patriotism in the hearts of the people. This is the day when all the citizens of our country unite together under the single blanket of togetherness and celebrate the day with zeal and zest. It also reminds us of the value of democracy and to perform our fundamental duties to make our country self reliant, developed and resilient.

My Duty towards my Country Essay