Tiger is a largest animal of cat species having unique pattern of dark vertical stripes on its reddish-orange fur. We have provided below various essay on tiger in order to help students. Now-a-days, essays and paragraphs writing competitions are common strategy followed by the teachers in the schools and colleges in order to enhance the skill and knowledge of students about any topic. All the tiger essay given below are written using very simple words under various words limit according to the need and requirement of students.

Long and Short Essay on Tiger in English

We have provided below short and long essay on Tiger in English language.

The essays have been written in simple language to easily provide you complete details of physical and behavioral characteristics of tigers.

After reading these Tiger Essay you will know what does a tiger looks like, how does it hunts and feeds on its prey, its social behaviour etc.

You can use these essays during your school and college competition on essay writing, debate or talk shows.

The zoological name of tiger (national animal) is Panthera tigris. It is a carnivorous animal which comes under the category of mammal as it gives birth to a child. It belongs to the cat family as a largest living member. It is found all around Asia especially in the countries like Bhutan, China, India, and Siberia. Bengal tigers are generally found in Sundarbans (watery jungle) located in Bangladesh and West Bengal including other south-east Asian countries. They are found in various colors especially white, blue and orange with black stripes. Black stripes on their upper body help them to hide away while hunting. Each and every tiger has different pattern of stripes on their body. 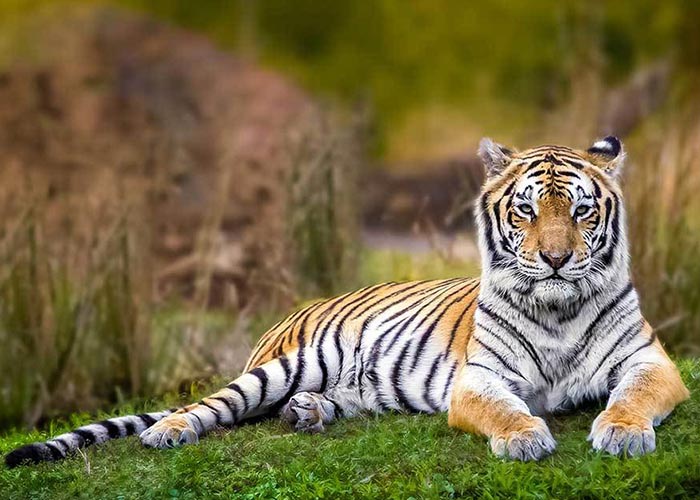 Tiger is a National animal of India. It has been declared as the national animal of country because of its royal look. It is very famous and strong animal known for its grace, power and agility. It is an Asiatic carnivorous animal zoologically named as Panthera tigris. There are various species and subspecies of the tigers are found all over the world. Tiger is an endangered species of the animal however few are left (according to the world tiger census) all over the world which we have to conserve in any way in order to save their life on the earth.

Government of India has run a program named “Project Tiger” in April 1973 in order to maintain the position of continuously decreasing tiger population in India. It is the matter of happiness that because of the Project Tiger campaign, the population of tigers in India is in a comfortable position.

Tiger is a national animal which belongs to the cat family. Scientific name of tiger is Panthera tigris. It is known as the largest animal in the cat family. It is found in various colors such as orange, white and blue having black stripes. Each and every tiger has different black stripes on their body. They may be different outside however their underside of abdomen becomes white. Bengal Tigers were originated in Siberia however they migrated to south because of the colder climate. Now, the natural heritage of the Royal Bengal Tiger is India. Bengal Tigers can be 7 to 10 feet long and 350 to 550 lbs weight.

They vary in size and weight depending on the subspecies and places they found. Siberian tigers are considered as the largest tigers. Females are considered to be little smaller than the males. Few decades ago, tigers were endangering continuously however because of an Indian campaign “Project Tiger”, the condition of tigers in India is in control. Earlier they were hunted very heavily by the man for the purposes like sports, traditional medical products, etc. ‘Project Tiger’ was initiated by the government of India in April 1973 in order to get control over their number. The main threats to the tiger’s life are deforestation means habitat loss and population fragmentation.

Tiger is a wild animal which has been declared as the national animal of India by the Indian government. It is considered as the cruelest wild animal to which everyone has fear of. It is a very strong animal which can jump to the long distance. It looks very calm however very clever and can suddenly grab its prey from the long distance. It becomes very fond of blood and flesh of other wild animals such cow, deer, goat, dog, rabbit, (sometimes human beings according to the chance), etc.

Tigers are called as lord of Jungle as they symbolize the wildlife wealth of the country. This is an animal having the combination of strength, grace, enormous power and agility which is the big reasons of its respect and high esteem. It is estimated that almost half of the total population of tigers are living in India. However, in the last few decades, the population of tiger in India was decreasing to a extent. The Project Tiger was launched by the government of India in 1973 in order to protect the existence of this royal animal in the country.

There are almost eight races of the tiger and the Indian race named as Royal Bengal Tiger is found in almost all over the country (except north-western region). Few years after the launch of Project Tiger, it was seen a marked increase in the tiger population in India. According to the census of 1993, the total number of tiger in the country was almost 3,750. Around 23 tiger reserves (covering an area of 33,406 sq. km) have been made under the campaign of Project Tiger throughout the country.

Tiger is a wild animal and popularly known as the national animal of India. It is almost similar to the cat as it belongs to the cat family. It is known as the largest species of the cat family. It has big teeth and a long tail. It can be of various colors (such as white, blue and orange) however everyone has black stripes on their body. It can run to a long distance with huge jumps within few minutes because it has a God gifted padded feet with sharp claws. Its four teeth (two in upper and two in lower jaw) are very sharp and strong in order to grab a huge prey to fulfill its heavy food need. The length and height of a tiger can be about 8 to 10 feet and 3 to 4 feet respectively.

It is a carnivorous animal and become very fond of blood and flesh. Sometimes, it comes to the villages from the dense forests in the search of food and eat any animal even people. It makes a solid grip on its preys (such as deer, zebra and other animals) very suddenly through its strong jaws and sharp claws. Generally, it sleeps during day time and hunts during night time because of easiness in grabbing preys. Killing wild animals without the need of food is its nature and hobby which shows its strongness and being powerful in the forest in front of other animals. That’s why, it is known as very cruel and violent wild animal.

In India, tigers are commonly found in Sundarbans (Assam, West Bengal, Tripura, Central India, etc). More big sized tigers are found in the African jungles however Royal Bengal Tigers look most beautiful of all. Tiger killing has been prohibited all through the country from the time when the number of tigers was decreasing very fast. There are six living subspecies of tigers found (such as Bengal tiger, Siberian tiger, Sumatran tiger, Malayan tiger, Indo-Chinese tiger, and South-Chinese tiger) and three have been recently extinct (such as Javan tiger, Caspian tiger, and Bali tiger).

Tiger is a very violent wild animal. It has been declared by the Indian government as the national animal of India. It is considered as the strongest, powerful and most beautiful animal on this planet. It lives in a dense forest however sometimes comes to the villages and other residential places in the search of food or deforestation. Siberian Tigers are generally used to live in cold places however Royal Bengal Tigers in the forest near river that’s why they know well to swim.

Few decades ago, tigers were hunted by the people to a great extent for fulfilling various purposes including illegal business of its body parts like skin, bones, teeth, nail, etc. It resulted in the massive decrease in the population of tigers all over India. Tigers are also found in other countries like Bangladesh, Cambodia, Thailand, Laos, China, Indonesia, Myanmar, Nepal, Malaysia, Russia, Vietnam, Bhutan, etc.

Tiger is a carnivorous animal which hunts in the night however sleeps for day. Tiger has a strong and powerful body using which it can jump up to the high length (almost 7 ft) and run up for long distance (almost 85 km/h). Black stripes on their blue, white or orange body make them really attractive and beautiful. It has naturally strong jaws, teeth and sharp claws in order to grasp its prey from long distance. It is considered as its long tail helps to maintain balance while hunting the prey. A tiger can be around 13 feet in length and 150 kg in weight. Tigers can be recognized by their unique pattern of stripes on the upper body.

Tiger as a National Animal

What is Project Tiger

Project Tiger is a campaign run by the government of India in order to maintain the population of tiger in country. It was established in 1973 in order to save tigers from the extreme threat of extinction. This project was made to focus on the preservation of remaining tigers all over the country as well as increase their number through the breeding of species. Around 23 tiger reserves have been made throughout the country for providing the safety and natural environment to them. It was seen a marked improvement in the tiger population by 1993 in the country. However despite the increase in population, the population of tigers in the country is still not satisfactory compared to the effort and money put in the project.