Elephants are the largest land animals with distinct body parts. Unlike other mammals, elephants don’t have nose, instead they breathe through a long trunk. They have huge fan like ears and long extended teeth called tusks. Because of their distinct tusks they are often called tuskers.

Elephants are wild animals; though, they are also domesticated by humans to mainly perform laborious tasks. Colossal body parts give the elephants tremendous physical strength over humans, thus they are tamed and made to perform strenuous and challenging tasks. Elephants have a distinct social structure displaying feelings of compassion, love and care for the family members.

Long and Short Essay on Elephant in English

We have provided below various essay on elephant in order to help students.

Now-a-days, essays and paragraphs writing are more common strategy followed by the teachers in the schools and colleges in order to enhance student’s skill and knowledge about any subject.

All the elephant essay given below are written using very simple words and easy sentences under various words limit. Students can select any of the essays given below according to their need and requirement:

Elephant is a very big animal. It lives in the forest however it is a pet animal also. Some people keep it at home as a pet animal in order to earn money through circus. It is also kept in the zoo in order to enhance the glory of zoo as well as interest of kids. It has a big body with four legs like pillars, two fan like ears, a long trunk, a short tail and two small eyes. A male elephant contains two long white teeth called as tusks. It can eat soft green leaves, plants, grains, etc. It is very useful animal to the man and proved to be a good friend to mankind as it performs many functions such as earns money, carries heavy loads, etc. It has long life span and lives around one hundred years. 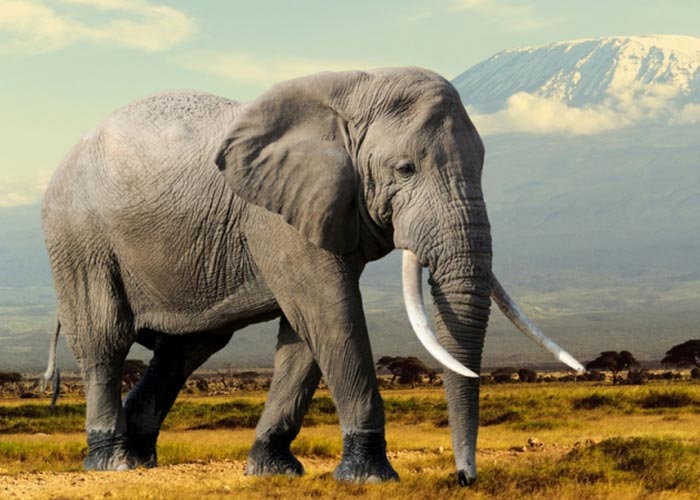 Elephant is a biggest animal on the land. It is also considered as the strongest animal on the land. Generally it is a wild animal however can live as a pet animal after proper training in the zoo or with human being at home. It has been proved a useful animal for the humanity. It is an animal with big body generally found in the grey color.

It’s all four legs looks like a pillar and two big ears just like a fan. Its eyes are quite small in comparison to the body. It has a long trunk and a short tail. It can pick up a range of things very easily through its trunk such as a small needle and very heavy trees or loads. It has two long white tusks on each side of trunk.

Elephants live in the jungle and generally eat small twigs, leaves, straw and wild fruits however a pet elephant can also eat bread, bananas, sugarcane, etc. It is a pure vegetarian wild animal. Now-a-days, they are used by the people to carry heavy loads, in the circus, lifting logs, etc. In the ancient time, they were used by the kings and dukes in the wars and battles. It lives for long years (more than 100 years). It is very useful animal even after death (bangles are made of bones and tusks).

Elephant is a largest animal on the land. It lives in the forest however can be a pet after proper training. It can be more than eight feet in height. Its big and heavy body is supported by the strong pillar like legs. It takes help of its long trunk in eating leaves, plants, fruits or trees. Generally two types of elephants are found on land African (scientific name is Loxodonta africana) and Asian (scientific name is Elephas maximus).

Its big hanging ears looks like a fan and legs like a pillar. It has a long trunk attached with mouth and two tusks each side. The trunk of an elephant is very flexible and strong and known as a multi-purpose organ. It is used for feeding, bathing, breathing, expressing emotions, fighting, etc by the elephant.

African elephants are little bigger is size and darker in color than the Asian elephants. They have more prominent ears also. Elephants are commonly found in India, Africa, Sri Lanka, Burma, and Siam. They generally like to live in a herd and become very fond of water. They know well about swimming. Because of being an herbivorous animal, they depend on plants in the forest in order to meet their food need. They move to villages and other residential places in the lack of food in forest or because of deforestation. It is known as an intelligent animal and benefits man in many ways.

Elephant is a strongest and biggest animal on the earth. It is quite famous for its big body, intelligence and obedient nature. It lives in jungle however can be trained and used by people for various purposes. Its peculiar features are four pillars like legs, two fan like ears, two small eyes, a short tail, a long trunk, and two long white tusks. Elephant eats leaves, stem of banana trees, grass, soft plants, nuts, fruits, etc in the jungle. It lives more than hundred and twenty years. It is found in India in the dense jungles of Assam, Mysore, Tripura, etc. Generally elephants are of dark grey color however white elephants are found as well in the Thailand.

Elephant is an intelligent animal and has good learning capacity. It can be trained very easily according to the use in circus, zoo, transport, carry loads, etc. It can carry heavy logs of timber to a long distance from one place to another. It is an animal of kid’s interest in the zoo or other places. A trained elephant can perform various tasks such as delightful activities in the circus, etc. It can be very angry which create danger to the humanity as it can destroy anything. It is useful animal even after death as its tusk, skin, bones, etc are used to make costly and artistic items.

Elephant is a very huge wild animal lives in a jungle. It looks quite ugly however mostly liked by the kids. It has big heavy body and called as royal animal. It can be more than 10 feet in height. It is found in coarse dark grey color with very hard skin. In other countries, it is found in white color also. Its long and flexible trunk helps in feeding, breathing, bathing and lifting heavy loads. Its two big ears hanging like big fans. Its four legs are very strong and look like pillars. Elephants are found in the forests of India (Assam, Mysore, Tripura, etc), Ceylon, Africa, and Burma. Elephants like to live in groups of hundreds (lead by a big male elephant) in the jungle.

It is very useful animal to the humanity whole life and after death also. Its various body parts are used to make precious things all over the world. Bones and tusks of elephant are used to make hooks for brushes, knife-handles, combs, bangles including other fancy things. It can live for many years from 150 to 200 years. Keeping elephant at home is very costly which an ordinary person cannot afford.

It has very calm nature however on teasing it can be very angry and dangerous as it can destroy anything even kill people. It is known as intelligent and faithful animal because it understands every sign of the keeper after training. It obeys its keeper very sincerely till death.

An elephant is very clever, obedient and biggest animal on the earth. It is found in the Africa and Asia. Generally, it is found in grey color however white in Thailand. Female elephants are used to live in groups however male elephants solitary. Elephants live long life more than 100 years. They generally live in jungles however also seen in the zoo and circus. They can grow around 11 feet in height and 13,000 pounds weight. The largest elephant ever has been measured as 13 feet in height and 24,000 pounds in weight. An individual elephant can eat 400 pounds of food and drink 30 gallons of water daily.

Elephant skin becomes one inch thick however very sensitive. They can hear each other’s sound from long distance around 5 miles away. Male elephant starts living alone whenever become adult however female lives in group (oldest female of a group called as matriarch). In spite of having intelligence, excellent hearing power, and good sense of smell, elephants have poor eyesight.

Elephants look very attractive to kids because of its interesting features such as two giant ears, two long tusks (around 10 feet long), four pillars like legs, a huge trunk, a huge body, two small eyes, and a short tail. It is considered that tusks are continued to grow entire life. Trunk is used to eat food, drink water, bath, breathe, smell, carry loads, etc. It is considered as elephants are very smart and never forget any event happened in their life. They communicate to each other in very low sound.

The baby of an elephant is called calf. Elephants come under the category of mammals as they give birth to a baby and feed their milk. A baby elephant can take almost 20 to 22 months in getting fully developed inside its mother womb. No other animal’s baby takes such a long time to develop before birth. A female elephants give birth to a single baby for every four or five years. They give birth to a baby of 85 cm (33 inch) tall and 120 kg heavy. A baby elephant takes almost a year or more to learn the use of trunk. A baby elephant can drink about 10 liters of milk daily. Elephants are at risk of extinction because of their size, prized ivory tusks, hunting, etc. They should be protected in order to maintain their availability on the earth.