Essay on Adult Education in India

The concept of adult education in India originated to offer education to those who were deprived of formal education during their childhood.

The National Fundamental Education Centre (NFEC) established by the government of India in 1956, initiated a Directorate of Adult Education. The Centre came to be known as the Department of Adult Education and formed a part of the National Institute of Education under NCERT in the year 1961. It later separated from NCERT and became independent entity in 1971.

The number of activities in the field of adult education has increased over the years across the country, though a vast chunk of India’s population still remains illiterate. 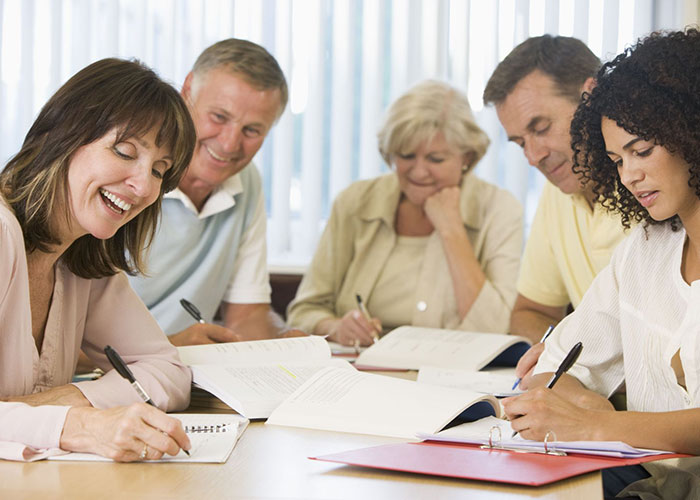 Directorate of Adult Education in India stemmed from National Fundamental Education Centre (NFEC) that was established by the Indian government back in 1956. Later, it came to be known by the name Department of Adult Education and formed a part of the National Institute of Education under NCERT. The government promoted adult education and as it saw a considerable increase in the educational activities the department shifted from NCERT and formed a separate entity.

Illiteracy is a major problem in our country and the concept of adult education has been introduced to curb this issue to some extent. Any adult who was deprived of education during his early life and feels the need for seeking basic or vocational education can enrol for the adult education program. A number of programs have been initiated to promote adult education for those who have crossed the age of formal education. National Literacy Mission (NLM) launched in the year 1988 is the most prominent of them all.

Illiteracy is the root cause of most of the problems not only in India but also in other developing nations. In order to overcome this problem, our country has not only made education a fundamental right of every child and come up with The Right of Children to Free and Compulsory Education Act but has also introduced the concept of adult education. Any adult who could not get formal education in his early life can enrol for adult education. An adult can seek both basic education and vocational training based on his requirement.

The concept was introduced in the year 1956 and many adults have benefitted from it. Adult education has opened new arenas for several adults. It enables them to earn their living by securing better paying and more respectable jobs. Education does not only make a person earn better but also makes him more aware about the things happening around him and empowers him to bring about change in the society.

A number of night schools have been set-up to provide education to adults who work during the day. This way they can seek education post their working hours. Besides, many NGOs and public sector enterprises also extend their support to this mission.

The introduction of adult education in India came as a boon for thousands of people. A number of people in India, especially those from the poor classes, are deprived of education during their childhood due to various reasons such as lack of funds, family circumstances and lack of schools in the vicinity, etc. While they may remain unaffected by this loss during their childhood the consequences of illiteracy hit them hard as they go out to earn their livelihood. However, they now have the option to seek education even as adults so as to shape a better future for them.

The concept of adult education in the country was initiated by the National Fundamental Education Centre (NFEC) set up by the government of India in 1956. Since then it has helped several adults seek basic as well as vocational education which in turn has helped them in the following ways:

Illiteracy is said to be a curse for the society. High illiteracy rate impacts the growth of a nation adversely. India is among the various developing nations that are faced with the problem of illiteracy. However, the Indian government is continually working hard to curb this problem. It introduced the Right of Children to Free and Compulsory Education Act to ensure that every child gets education. Education has been made the fundamental right of every child in the country. Besides, provisions have also been made to provide education to the adults who were deprived of it during their childhood.

The much appreciated concept of Adult Education in India was originated by the National Fundamental Centre (NFEC) that was set up by the Indian government back in 1956. The centre was later named as Department of Adult Education and became a part of the National Institute of Education under NCERT. Adult education was promoted by the government and many people came forward to make the most of the opportunity being offered. Soon there was a huge increase in the number of people enrolling for it as well as a substantial increase in the educational activities. With this the Department of Adult Education separated from NCERT and formed an independent entity.

As the name suggests, adult education is aimed at empowering those individuals who were deprived of education during their childhood. The government has opened a number of schools to impart education to the adults. Both basic as well as vocational education is provided here.

So, people are not only imparted education but are also trained to earn their livelihood through adult education. Special night schools have also been opened in many states so that people can study after their working hours. Several individuals have benefitted by this. Education has helped them seek better paying jobs and establish a good social standing.

One of the biggest problems in our country is that the rich are getting richer and the poor are getting poorer. The main reason behind this is that those belonging to the poor classes are so engrossed in earning their livelihood to make their ends meet that they overlook the importance of seeking education. Instead of sending their kids to school, people from the poor classes send them to work as for them more working hands in the family means more income. As these kids grow they have no other choice but to indulge in menial tasks such as cleaning and sweeping due to lack of education and the trend continues.

In order to break this vicious circle, the government of India has come up with the concept of adult education. All those adults who could not seek education during their childhood and want to get educated later in life can enrol for the adult education program. As part of this program, both basic education as well as vocational training is imparted to empower the individuals to shape a better future. It is the sole choice of an individual as to what he wants to opt for.

Directorate of Adult Education initiated in India from the National Fundamental Education Centre (NFEC) established in the year 1956. Since then the government has continually been making efforts to promote adult education in the country. A number of schools including ones that offer night classes have been opened to provide adult education. Also various means and modes are being used by the government to emphasize the importance of seeking education and the efforts have not been futile. Several individuals have come forward to make the most of this opportunity and the number is on the rise. With this, the number of educational activities being offered has also seen a significant increase.

While many seek education to get good employment opportunities and earn their livelihood, a number of people especially women have come forward to seek adult education just to become more aware and help raise their children more efficiently. Apart from this, adult education also helps in the following way:

Article on Importance of Education in our Life

Article on Importance of Education in Society

Article on Importance of Education for Children

Article on Importance of Education for Women

Speech on Importance of Adult Education

Essay on Importance of Adult Education

Essay on Women Education in India

Essay on Importance of Education

Speech on Importance of Education

Slogans on Importance of Education

Speech on Value of Education

Paragraph on Importance of Education

Shailja is one of those who is lucky to have turned her passion into her profession. A post graduate in English Literature, writing comes naturally to her and she is doing what she does best - writing and editing. An avid reader, a fashion junkie, nature lover, adventure freak and a travel enthusiast are some of the other terms that describe her.