Qutb Minar also called Qutub Minar is a minaret located in Mehrauli at New Delhi. The minar is 73 meter tall and shaped like a tapering tower with base diameter of 14.3 meters and 2.7 meters at the peak. It is also an UNESCO World Heritage Site. The construction of Qutub Minar was started by Qutb ud Din Aibak in around 1192 and was completed by his successor and son-in-law Shamsuddin Iltutmish.  Further modifications to the monument were made by Firoz Shah Tughlaq and Sher Shah Suri. The Qutub Minar is surrounded by several other historical monuments. It is a very popular picnic spot for domestic as well as foreign tourists.

Long and Short Essay on Qutub Minar in English

We have provided below short and long essay on Qutub Minar in English for your information and knowledge.

The essays have been written in simple yet effective English for you to easily remember them and present them whenever needed.

After going through these Qutub Minar essay you will know when and by whom was Qutub Minar built, how many times was it restored, why is it an important world heritage site etc.

The essays will be extremely helpful in enhancing your knowledge on the subject.

Qutb Minar (also called as Qutub Minar or Qutab Minar) is a most famous Indian historical monuments which is counted as the 2nd tallest minar of India (first is Fateh Burj of 100 meters, Chappar Chiri at Mohali). Qutb Minar is a 73 m tall minar built in Indo-Islamic architectural style. It has been added to the UNESCO World Heritage Site. It opens every day of the week from 6am to 6pm. It is located at Mehrauli, Delhi-Gurgaon Road. Visiting this monument in the vacations is the best way to know about history. Delhi is a famous city for many historical monuments. 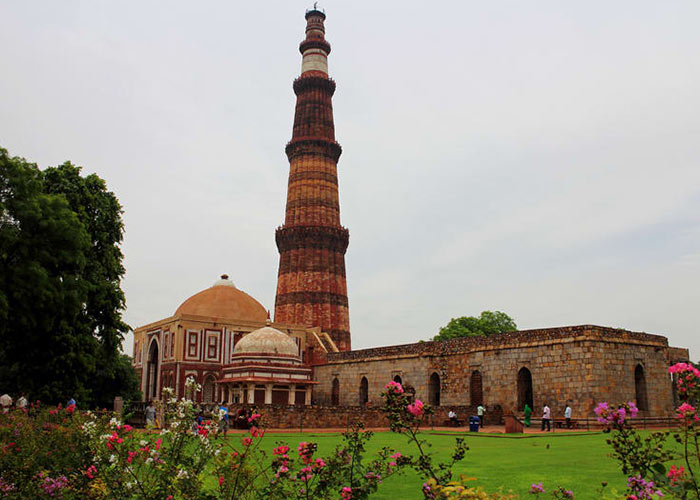 Qutb Minar is one of the famous historical monuments of the India. It can be also written as the Qutub Minar or Qutab Minar. It is called as the 2nd tallest minar of India (around 73 metres). The first tallest minar of India is Fateh Burj (100 meters tall) in Chappar Chiri at the Mohali. Qutb Minar has been added as one of the best UNESCO World Heritage Sites. It is located in Delhi and built using red sandstone and marble in the Indo-Islamic architectural style.

The base diameter of this minar is 14.3 metre and top diameter is 2.7 metre. Its stairs contains 379 steps. It was started building in 1193 by the Qutb-ud-din Aibak however carried on by his successor named Iltutmish. Its fifth and last storey was constructed by the Firoz Shah Tughlaq in 1368. There are many other ancient and medieval structures and ruins surrounding the minar in the Qutb complex.

Qutub Minar is an Indian historical monument which stands alone as a prime attraction amongst other historical monuments of India. The meaning of Qutub is the pole of justice. It is located in the capital of India means Delhi. Qutub Minar has become one of the tallest and famous towers of the world. It is counted as tallest brick minaret all over the world. It has been listed to the UNESCO world heritage sites. It is a great example of the masterpiece of the Mughal architecture. It is a 73 metre tall minar made up of red sandstones in the architectural style (Indo Islamic architecture) of 13th century.

It was built in 12th to 13th century by the Qutb-ud-din Aibak and his successors in order to celebrate the victory of Mohammed Ghori over Rajputs. Earlier, it was the symbol of military strength of Turko-Afghan Empire and Islam. It is one of the tallest minar in conical shape having base diameter of 14.3 meter and top diameter of 2.7 meter. It contains 379 staircases inside it and five distinct stories. A spectacular view of the city looks from the top of minar. Its first three storeys are built using red sandstones however fourth and fifth storeys are built using marble and sandstones.

Qutub Minar is a most famous and one of the tallest minar of India. It is located in Delhi at Aurobindo Marg, Mehrauli and has been added to the world heritage sites. It is a second tallest minar of India which was constructed in 1192 by the Qutab-ud-din Aibak and completed later by his one of the successor named Iltutmish. It is a soaring conical tower built in Indo-Islamic Afghan architectural style. The height of this minar is 73 meter (237.8 feet) having 379 steps or staircases.

There is an attractive green garden surrounding the Qutub minar drawing the mind of visitors. It is one of the most famous and attractive destination of the tourists in India. It is the most visited monument of the India where people from corner of the world come to see every year. It is a five storeys tower built in unique designs (first three storeys are built using red sandstones and top two storeys are built using marble and sandstones) having base diameter of 14.3 meter and top diameter of 2.7 meter.

There is another taller minar adjacent to the Qutub Minar is Alai Minar. Qutub Minar symbolizes the victory and strength of Islam as well as served earlier to call people for prayer at Quwwat-ul-Islam mosque. It is the attractive tourist’s destination in Delhi and mostly visited by the kids, children and school students in their summer or winter vacations.

Qutub Minar is located in the south Delhi at Aurobindo Marg, Mehrauli. It is a most famous magnificent structure made up of red sandstones called Qutb Minar. It is the second tallest tower of India stand alone as it is from the ancient time more than 800 years. The manufacturing of this tower was started in 1192 by the Qutab-ud-din Aibak (known as the first successful Muslim ruler who built this Islamic dynasty in India). It is believed as this tower was ordered to be built as the famous historic monument of India after defeating the Rajputs. The manufacturing of this tower was completed by one of his successors named Iltutmish.

It is the splendid piece of Mughal architecture and has become a popular tourist spot in India. It attracts millions of tourists especially students every year. It has been declared as one of the World Heritage Sites by the UNESCO. In the ancient time Qutub-ud-din Aibak came to India, fought to Rajputs and became successful to defeat them. In order to celebrate his victory over the Rajputs, he ordered to build this unique piece of minar. The construction of it was completed in several centuries however some changes are made from time to time (last change was done by the Sikandar Lodi). Originally it was built of only one storey tall and other storeys were added by the later rulers.

The base diameter of it is 14.32 metre and top diameter is 2.7 meter. It is 73 metre tall minar containing 379 steps or staircases. It is considered that it was of seven storeys however top two were fell in the earthquake. Some other unique structures such as Alai-Darwaza, Tomb of Iltutmish, two mosques, etc are surrounding this tower as well as enhancing its attraction. It is built in Indo-Islamic architectural style.

Qutub Minar is the second tallest and ever attractive historical monument of India located in Delhi at Aurobindo Marg, Mehrauli. It is built in unique architectural style using red sandstones and marble. It is considered that Mughals built this victory tower to celebrate their victories over the Rajputs. It is counted amongst famous towers of the world and added to the world heritage sites. It is 73 meter tall tower having 14.3 metre base diameter, 2.7 meter top diameter, 379 staircases and five storey building.

The construction of the Qutub Minar was started by the Qutab-ud-din Aibak however finished by the Iltutmish. The construction of this minar was completed in 1200 A.D. It is one of the great masterpieces of the Mughal architecture having number of storeys with beautiful carvings. It is one of the attractive sightseeing which attracts a huge crowed every year from every corners of the world. It had faced many damages because of the earthquakes however restored and renovated each time by the respective rulers. Firoz Shah had repaired its two top floors which was damaged in the earthquake. Another restoration was done by the Sikandar Lodi in 1505 and Major Smith in 1794 to repair damaged parts of the minar. It opens up at 6am in the morning and closed at 6pm in the evening everyday of the week.

The minar is built many years ago using red sandstone, sandstones and marbles. It contains several flanged and cylindrical shafts and its storey is separated by balconies. The first three storeys of the Qutub minar are built using red sandstone however fourth and fifth storeys are built using marble and sandstone. There is a Quwwat-ul-Islam Mosque (considered as the first mosque built in India) at the base of this minar. There is an iron pillar of height 7 meter in the Qutb complex written with Brahmic inscriptions. The walls of the minar are written with various verses from the Quran (Muslim’s holy mythological scripture). It also contains its history written in Devnagari and Arabic characters.

It is the famous monument of tourist attractions including other structures near it. From ancient time, it is believed that one who encircle it (iron pillar) with hands by standing in front of it with his back, would get his all wishes fulfilled. Tourists from many corners of the world come here every year to see the beauty of this historical and unique monument.