Taj Mahal meaning the crown of palace is a mausoleum commissioned by Mughal Emperor Shah Jahan in 1632, in the memory of his most beloved wife Mumtaz Mahal. Located on the south bank of Yamuna River in the city of Agra, the monument is made up of ivory-white marble and also houses the tomb of Emperor Shah Jahan himself. Tomb stands at the centre of a 17-hectare (42-acre) complex which includes guest houses and mosque. The monument is an UNESCO world Heritage Site and every year is visited by millions of tourists. It is a fine example of Mughal style architecture built by Architect Ustad Ahmad Lahauri.

Long and Short Essay on Taj Mahal in English

We have provided below short and long essay on Taj Mahal in English for your information and knowledge.

The essays have been written in simple English language so that you can easily remember it and present whenever required.

After going through these Taj Mahal essay you will be able to answer questions like – when was Taj Mahal built; who commissioned the monument; what makes it so popular among the tourists; why is the site listed as the UNESCO world heritage location etc.

The essays will be very useful in your school college assignments where you are required to speak upon or wrote or debate about world heritage sites in India.

Taj Mahal is a most attractive and popular scenery look historical place. It is located in the Agra, Uttar Pradesh. It is situated in very large area at very beautiful place having river on back side. It looks like natural scenery. It looks like a heaven on the earth. It is built using white marble. It attracts people’s mind from all over the world to see every year like a love at first sight. Taj Mahal is the symbol of the eternal love of the Shah Jahan who had built this in the memory of her wife Mumtaz Mahal. Taj Mahal is counted as one of the Seven Wonders of this World. It is the burial place (mausoleum) of the great Empress Mumtaz Mahal. 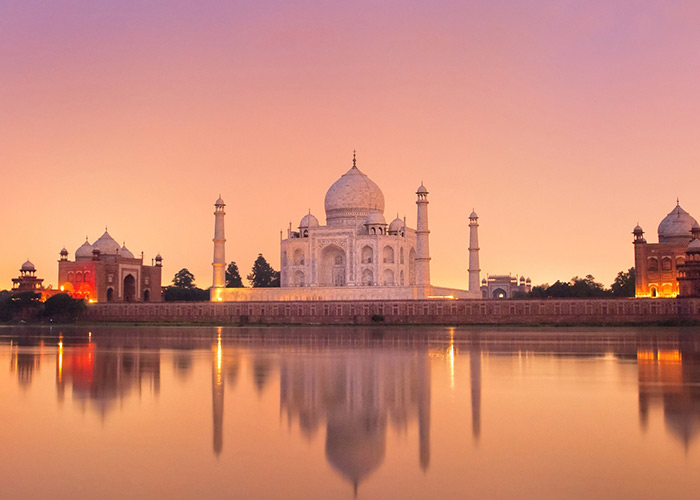 Taj Mahal is a beautiful and most attractive historical place in India. It is a cultural monument of India which was built by the King Shah Jahan in the memory of his wife (Mumtaz Mahal) after her death. It is situated in a big area having lots of greenery in front and side, a river in back side, and lake and lawn. It is located in the Agra, UP, India. It is one of the Seven Wonders of the World. It is the most beautiful building made by the white marble. It is like a heaven of dream. It is designed in attractive way and adorned with royal beauty. It is one of the amazing Nature’s beauties on the earth.

There are graves of both, king and queen in a dark chamber under the dome. There are some rhymes written of Quran on the walls using multicoloured pieces of glass. It has four minarets situated at its all four corners in very attractive manner.

Taj Mahal is a great historical monument designed very beautifully. It is made up of white marbles which gives it a grand and bright look. It has attractive lawns, decorative trees, beautiful animals, etc in its surrounding areas. It is located in the Agra, UP at the bank of the Yamuna River. It is a very beautiful tomb made by the King Shah Jahan in the memory of Queen Mumtaz Mahal. In the ancient time Shah Jahan was a king and his wife was Mumtaz Mahal. Shah Jahan loved her wife a lot and he became very upset after her death. Then he decided to build a large grave in the memory of her wife. And he built Taj Mahal as a seventh wonders of the world.

Taj Mahal is located just back to the Agra fort from which King was used to see Taj Mahal daily remembering her lovely wife. Every year thousands of visitors come to the Agra to see its beauty. It was built by the hard works of various artists, artisans and workers. It was completely prepared in twenty years of long time by the use around 20 crores of Indian rupees. Taj Mahal looks very beautiful in the silvery night of full moon.

Taj Mahal is a very beautiful historical monument of India was built in the 17th century by the Mughal emperor, Shah Jahan. It was built by him in the memory of his wife called Mumtaz Mahal. She was his 3rd wife whom he loved much. After her death, king was very upset and built a Taj Mahal by spending lots of money, several lives and days. He was used to of seeing the Taj Mahal from his Agra fort daily by remembering his wife. Taj Mahal is located in the city of Agra, Utter Pradesh in a very large and wide space. It is one of the seventh most beautiful buildings all over the world and called as seventh Ajuba. It is one of the most attractive tourist destinations in India where more than thousands of tourists come every year.

Taj Mahal and Agra Fort have been marked as a UNESCO World Heritage Site and in 2007, it has been chosen as the Seven Wonders of the World. Taj Mahal is located 2.5 km away to the Agra Fort. It is a Mughal architecture and has been designed so beautifully by the mixture of ideas of Islamic Indian, Muslim arts, Persian, etc. It is supposed that Shah Jahan too was keen to build a same black tomb for himself however; unfortunately he died before implementing his ideas into action. After his death he has been buried in the side with his wife in the Taj Mahal.

Taj Mahal is one of the best and most beautiful tourist destinations of India. There are many wonderful historical monuments in India however Taj Mahal is only one. It is a great artistic charm which attracts various people’s mind towards it every year. It is the most fascinating monument of India has been chosen as seventh wonder of the world. Taj Mahal is the love symbol of the great king of Agra. It is built using white marble which gives it attractive and amazing look. It has been called by the Rabindranath Tagore as “A Dream in Marble”. It is a real heaven on the earth which has been mentioned as the UNESCO World Heritage Site.

It was built by the great Mughal emperor, Shah Jahan, in the memory of his dead wife, Mumtaz Mahal. It is considered that he had loved her wife so much and became so sad after her death. He started living without food and water. He decided to keep her all the memories in front of his eyes then built Taj Mahal in front of the Agra Fort in the memory of his eternal love. He was used to saw Taj Mahal daily from Agra Fort and remembered his wife. Taj Mahal took many years to get completed. This historical monument is a symbol of love of Shah Jahan and Mumtaz Mahal.

The surrounding environment of the Taj Mahal is so natural and attractive. It is located on the bank of Yamuna River in the city of Agra, UP. The Taj Mahal has been built using royal deigns by the ideas of many artists and artisans. Lots of decorative grasses and trees enhance its beauty and fragrance of the environment. There are also some charming water fountains set up in the middle of the cemented footpath in front of the Taj Mahal building. These charming water fountains make the entry to the great mausoleum.

Taj Mahal is a great Indian monument which attracts people’s mind from all over the world every year. It is located at the bank of the Yamuna River in Agra, Uttar Pradesh, India. It is a splendid masterpiece of the Mughal architecture in India. It is situated at least 2.5 km away from the Agra Fort. It was built on the order of the Mughal Emperor, Shah Jahan in the memory of his honourable and beloved wife, Arjumand Banu (later known as Mumtaz Mahal). She was very beautiful and loved so much by the King. After her death, King ordered his artisans to build a grand grave for her in her great memory. It is one of the greatest and highly attractive monuments of the world which has been mentioned as the 7th wonders of the world.

This monument is the symbol of the love and devotion of the Mughal Emperor, Shah Jahan to her wife. It is called as the grand Mughal monument (a majestic historical structure) which is located in the heart of India. It is prepared using white marble and costly stones engraved in its walls very beautifully. It is considered as the Taj Mahal has been gifted by the Mughal emperor, Shah Jahan to her lovely dead wife, Mumtaz Mahal. He called best artisans of the world to design the Taj Mahal building. It took many years and lots of money in getting prepared. It is also considered that he had rejected around hundreds of the designs and finally approved this one. Taj Mahal has four amazing pillars in its corners. They are designed so beautifully and slightly inclined outward in order to prevent Taj Mahal building from any natural calamities (like storm, etc) in the future.

The white marbles which have been used in building the Taj Mahal are very costly and were especially ordered from outside by the King to Agra. Taj Mahal has been structured combining various architecture styles like Indian, Persian, Islamic and Turkish. It has been declared by the UNESCO as one of the UNESCO World Heritage Sites in 1983. It has attained a worldwide popularity as a seventh wonder of the world. Last year I went to the Agra with my dear Parents especially to see the Agra Fort and Taj Mahal. It was my winter holiday, I was so happy to see the monumental beauty of India. My parents had clearly described me about its history and truth. Really I had seen its real beauty with my eyes and felt very proud to be an Indian.