Red Fort is a historical fort in the Indian capital city of Delhi. It is also a significant location because every year on Independence Day, the Prime Minister of India hoists the national flag from the ramparts of Red Fort. The fort has also witnessed the first ever raising of National Flag on 15th August 1947 by the first Prime Minister of India, Pundit Jawaharlal Nehru. The Red Fort is thus called because it’s build from red sand stone. The Fort was commissioned by the fifth Mughal Emperor Shah Jahan in 1639 and was built by the same architect who built Taj Mahal – Ustad Ahmad Lahori.

Long and Short Essay on Red Fort in English

We have provided short and long essay on Red Fort in English for your information and knowledge.

The essays have been written in simple yet effective English language so that you can easily remember them and present them when needed.

After going through these Red Fort essay you will be able to tell when was Red Fort built, who commissioned it, who was the architect etc.

The essays will be highly useful in your school/college assignments and events like speech giving, essay writing or debate competitions.

The Red Fort is a great historical monument in the India. It is located in the centre of Delhi (New Delhi). It was constructed by the Mughal emperor, Shah Jahan. Delhi was the capital of Mughals until British government had exiled Mughal emperor, Bahadur Shah Zafar in 1857. It is located at the bank of Yamuna River. The wall of the Red Fort is constructed using 30 meters high stones. It took around nine years to be completed. It is also known as Lal Qila of New Delhi. It enhances the glory of the capital of the country for many years. It is made up of using red stones and marbles by the skilled architecture of that time. 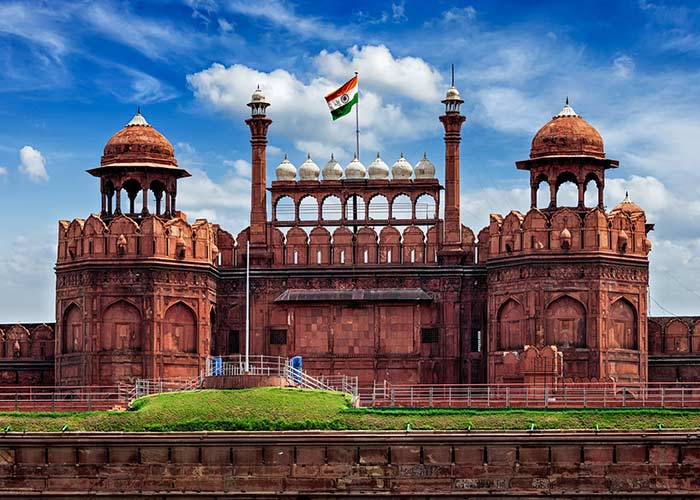 Red Fort is one of the great monuments of the India. It is located in the New Delhi in the centre of the city. Red Fort is the most glorifying among many historical buildings in the capital of the country. It is very famous all through the world. It has become the glory of India and people from many corners of the world come here to have a look. It was built by the Mughal emperor, Shah Jahan in 1648 by the help of skilled architecture of that time. It is built using very long red stones and took approximately nine years in getting completed.

It is situated at very approximately places at the bank of Yamuna River. It is located in front of the Chandni Chowk market in Delhi. It is very beautifully designed from inner and outer side. It has a big and grand museum inside having residues the Mughal time as an historical asset. There is a Diwan-e-Am as a hall of Public Audience. It also has a Diwan-e-Khas for meeting purposes.

Red Fort is located in New Delhi in the centre of the city. It is also known as the Hindustani Lal Quila as it is built using red-sandstones. It is originally known as Blessed Fort means Quila-i-Mubarak from the ancient time. Mughal emperors of India were used to live here for many years around 200 years until 1857. It has a big museum, a Diwan-e-Am (for Public Audience) and a Diwan-e-Khas (for meeting purposes). It was built by the Mughal emperor, Shah Jahan in 1648 at the bank of the Yamuna River. It was built as the equipped palace of Shahjahanabad (capital of 5th Mughal Emperor Shah Jahan).

It is situated adjacent to the older Salimgarh Fort which was constructed by Islam Shah Suri in the year 1546. Both are connected through the water channel called Stream of Paradise (Nahr-i-Behisht). It was designed to be built in innovative architectural style using Islamic prototypes including mixture of Timurid, Persian and Hindu traditions. It has been taken under the World Heritage Site in 2007 by the UNESCO. An Indian flag is hoisted by the PM every year on 15th of August on the main gate of this iconic symbol of country.

Red Fort is the most beautiful historical monument of India. It is located in New Delhi in the centre of the city. It was constructed by the Shah Jahan (the grandson of great Mughal Emperor, Akbar). It is beautifully designed and built after planning of the skilled architectures in the architectural style. It has become the centre of the political achievements and administrative innovations in the country. It is one of the famous historical architectural master pieces like Taj Mahal, Jama Masjid, The Peacock Throne, Moti Masjid, etc. Shah Jahan ruled here from 1627 to 1658 for 31 years (golden age in architecture and fine arts of Mughals).

He ordered the highly skilled and professional architectures to design and built a Red Fort using red sandstone at the west bank of the river Yamuna. It has a museum, beautiful structures like Rang Mahal, Moti Mahal, Diwan-i-Aam and Diwan-i-Khas. The surroundings of the pavilion have been decorated using precious gems, valuable stones, and silver linings. Diwan-i-Khas is beautifully designed and has its walls engraved with following text “If there is anywhere Paradise on earth, It is this, it is this, and it is this”. A Diwan-i-Aam is also built inside it as a Hall of public audience. Another superb structure like Pearl mosque or Moti Masjid is built near the Rang Mahal. Shah Jahan was very famous Mughal emperor and known as the “prince of builders”. At every Independence Day, the Prime Minister of India hoists a national flag here.

Red Fort or Lal Quila is the national symbol of the country. It is the most beautiful and innovatively designed historical monuments of the India. There are many historical places all over the India however it is most glorifying and attractive. It is designed and built very beautifully by the highly skilled architectures. It is a historical symbol of country and has become a monument of educational and historical value. Parents are generally go there in the vacations of their children to give them some knowledge about the historical place and monument. It has become the most important place for students visit.

Red Fort is located at the bank of Yamuna River in the centre of the city, New Delhi. It was constructed by the famous Mughal Emperor Shah Jahan in 1648 during 17th century. It is built using red stones. It is the place of great historical value and located near the Salimgarh Fort in Delhi. Other historical places in Delhi near to the Red Fort are Qutab Minar, Humayun’s Tomb, etc. My school principal arranges a trip every year for us to visit the Red Fort. We have to submit an assignment over the red fort after our visit. It is the place of attraction for the people of many countries.

It is one of the most famous tourist destinations in India where a big crowd of the people come every year from many countries. Prime Minister of the India hoist a national Flag here (on the ramparts of the Lahori Gate) every year on the most important Indian occasion of Independence Day, 15th of August. It has been selected as one of the World Heritage Sites in 2007 by the UNESCO.

Red Fort is also known as Lal Qila and located in the centre of the city. It is the masterpiece of the historical architecture and one of the attractive spots for tourists many countries. In order to make it as usual and save it as a historical asset of the country, it is maintained time to time by the Indian government. It was built by the Mughal Emperor, Shah Jahan in the year 1648 in the 17th century at the bank of the Yamuna River. It is situated in the New Delhi near to the Salimgarh Fort. On the Independence Day of India, prime minister unfurls the national flag here. Red Fort contains many beautiful structures within it (like Rang Mahal or Palace of Colours, Mumtaz Mahal, Khas Mahal, hammam, Shah Burj, Diwan-e-Khas, Diwan-i-Khas, Nahar-e-Bishisht (Canal of Paradise), etc). It is built using the red stones and designed by the highly skilled and professional architectures. On the first floor, there is a War Memorial Museum is housed.

Sheesh Mahal (means Sheesh-mirrors and mahal-palace) is situated in the northern and southern sections. There is a well designed Khas Mahal (Emperor’s Palace) as a special room for private purposes like worship or sleeping. A nice balcony in designed using the white marbles projecting towards the banks of Yamuna River. There is a well designed Peacock Throne. The text “if there is a paradise on earth, it is this, it is this, and it is this” is engraved on the walls of it. There is a Shah Burj is designed in the palace for the emperor’s private conclaves and relax in privacy. A Moti Masjid also called Pearl mosque which was added in the palace by the emperor Aurangzeb. It contains three domes and looks very elegance. North to the Moti Masjid, there is a Hayat Baksh means a Mughal garden which was built by the Shahjahan.

There is a Royal Tower of Shah Burj where lively gatherings and feasts was held. Red Fort of Delhi is considered as the greatest of Mughal Palaces and known as the heart of Shah Jahan’s empire. Red Fort has become a grand and attractive place for the tourists from the India as well as abroad and serving the country for many years. Last year I went to the Red Fort with my parents where I enjoyed a lot and got lots of knowledge about the fort including its history.

Essay on Freedom of Speech