An act of violence intended at the unsuspecting civilians or military personnel who are not in a combat, is termed as terrorism.  Generally it is carried out for political gain and to destabilize a government. Those who carry out such attacks are called terrorists. World had been suffering from terrorism since long, yet there is no relief. People die and government’s struggle to end terrorism. Terrorism has also become global making its elimination difficult. There is a need to fight together against terrorism and make the world a better place to live.

Long and Short Essay on Terrorism in English

Now-a-days people are really afraid of the terrorism and terrorists attack all time. It has become a warm topic as it is a big social issue.

We have provided below long and short essay on terrorism in English for your information and knowledge.

These Terrorism Essays have been written in simple English to make it easily understandable and presentable when required.

You can use following terrorism essay in your school events and occasions like essay writing, debate and speeches.

Terrorism is the unlawful act of violence which is used by the terrorists to make people fear. Terrorism has become a common social issue. It is used to threaten common public and government. Terrorism is used by various social organizations, politicians and business industries to achieve their goals in very easy way.

A group of people who take support of terrorism are known as terrorists. Explaining terrorism is not so easy as it has spread its roots very deep. Terrorists have any rule and law; they only use violent acts intending to create and enhance level of terror in the society and country. 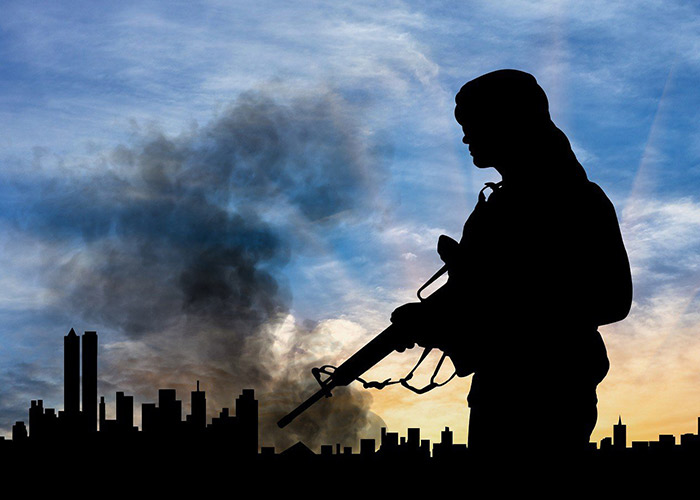 Terrorism has become a big national and international problem all over the world. It is a global issue which has affected almost all the nations throughout the world directly or indirectly. Opposing terrorism has been tried by many countries however; terrorists are still getting support by someone. Terrorism is a violent act of terrifying the common public anytime in the day or night. Terrorists have many objectives such as spreading threat of violence in the society, fulfilling political purposes, etc. They make civilians of the country their primary target.

Some of the examples of terrorism are bombing of US Embassy, atom bomb attack on Hiroshima and Nagasaki, etc. The main goal of the terrorists is fulfillment of their demands by the government of a specific country. They contact online social media or newspaper, magazine, etc to spread their voices to the public and government. Sometimes, terrorists attack is done to fulfill the religious and ideological goal.

India is a developing country who has faced many challenges in the past and currently, terrorism which a big national problem. It has faced challenges like hunger death, illiteracy, poverty, inequality, population explosion and terrorism which have affected its growth and development to a great extent.

Terrorism is a big threat fighting with a government and common public for the purpose of religion, motherland, and other unreasonable motives of the terrorists. Terrorists call themselves brave soldiers however, they are not real soldiers. Real soldiers never hurt common public and they fight only to save their country from the enemies. Real soldiers fight to fulfill the purpose of a nation. Whereas terrorists fight to fulfill their own, individual and unfair purposes.

A national soldier is fully responsible for his all the responsibilities however a terrorist never do that. Terrorists got their name from the word terror. Earlier, terrorism was limited to some specific areas like state of Jammu and Kashmir however; now-a-days, it has spread to almost all the areas especially regions of north eastern India. Recently, the terrorist attack in India was in Taj Hotel and Nariman house in Mumbai. In that attack, India had lost lives of many people and suffered financial loss.

Terrorism is a big national issue which is using the human mind to get complete victory. Terrorism is terrifying the mind of the human being to make them weak so that they can rule the nation again. It needs to be solved on international level. We all should think about terrorism together to finish it from the root. We should make a strong policy to completely destroy its kingdom as well as removing the striking terror from the human minds. Terrorism uses violent ways to achieve the purpose and get positive result.

Terrorism is the act of violence performed by the group of people called terrorist. They become very common people and somehow they lost their control over the mind because of some unfair natural disasters or unfair activities with them by others which make them unable to fulfil desires in normal and accepted ways. Slowly they are taken under the confidence of some bad people in the society where they are promised to get fulfilled all the desires. They get together and form a group of terrorists to fight with their own nation, society and community. Terrorism has affected all the youths of the country, their growth and development.

It has pulled the nation many years back from the proper development. Terrorism is ruling the country just like Britishers, from which we again need to be free. However, it seems that terrorism would always continue spreading its root to deep because some rich people from our nation are still supporting them to fulfill their unfair purposes.

India had faced lots of challenges such as poverty, population growth, hunger, illiteracy, inequality, and many more however, terrorism is highly dangerous till now affecting the mankind and humanity. It is more than dangerous and frightening disease which is affecting the people mentally and intellectually. Whether it exists in the small (Ireland, Israel, etc) or big (USA, Russia, etc) countries; it has challenged both to a same level. Terrorism is act of using international violence by the group of frustrated people means terrorists to achieve some political, religious or individual goals. The spread of terror by the terrorists is increasing day by day.

Terrorism has no any rule and laws, it only attacks on society or colony or crowd of the innocent people living in order to spread terror as well as give pressure to government to complete their demands. The demands of the terrorist become very specific to fulfil only what they want. It is a greatest threat to mankind. They never compromise their friends, family, innocent kids, woman and old people. They only want to explode atom bomb at the place of people crowd. They shoot on crowd, hijack flight and other terror activities.

Terrorist target to spread terror in their preferred areas, region or country within minimum time. Previously, it is supposed that terrorist’s activities were limited to the Kashmir only however, it has spread its roots to all over the country. There are many terrorist groups exists in the nation with their special name depending on their name. Two main types of terrorism are political terrorism and criminal terrorism depends on their works. Terrorists are well-trained group of people prepared to perform some specific purpose. More than one terrorist group are trained to perform different purposes. It is like a disease which is spreading regularly and need some highly effective medicine for permanent removal.

Terrorism is the process unfair and violent activities performed by the group of trained people called terrorists. There is only one boss who gives strict orders to the group to perform particular activity in any ways. They want money, power and publicity for the fulfilment of their unfair ideas. In such conditions, it is media which really helps to spread the news about terrorism in the society of any nation. Group of terrorist also take support of the media by especially contacting them to let them know about their plan, ideas and goals.

Various groups of the terrorists are named according to their aims and objectives. Acts of terrorism affects the human mind to a great extent and makes people so fear that they fear to go outside from their own home. They think that there is terror everywhere outside the home in the crowd like railway station, temple, social event, national event and so many. Terrorists want to spread terror within specific area of high population in order to publicize for their act as well as rule on people’s mind. Some recent act of terrorism are 9/11 attacks on the U.S. and 26/11 attack in India. It has affected the financial status and humanity to a great extent.

In order to reduce the terror and effect of terrorism from the nation, a tight security arrangement is done on the order of government. All the places which are crowded because of any reasons like social programmes, national events like Republic day, Independence Day, temple and etc. Each and every person has to follow the rules of security arrangement and has to pass from the automatic machine of full body scanner. Using such machines, security get help in detecting the presence of terrorists. Even after arrangement of such tight security, we are still unable to make it effective against the terrorism.

Our country is spending lots of money every year to fight against the terrorism as well as remove the terrorist group. However, it is still growing like a disease as new terrorists are getting trained on daily basis. They are very common people like us but they are trained to complete some unfair act and forced to fight against their one society, family and country. They are so trained that they never compromise their life, they are always ready to finish their life while fighting. As an Indian citizen, we all are highly responsible to stop the terrorism and it can be stopped only when we never come into the greedy talk of some bad and frustrated people.

All the above essay on terrorism are written in such a simple way so that students of classes 1, 2, 3, 4, 5, 6, 7, 8, 9, 10, etc can use very easily without any difficulty in understanding. Terrorism is an important social issue which urgently needs to be solved and ended in order to maintain a peaceful life all over the world. Terrorism essay written above may greatly help students to take part in the essay writing competition or get good marks in the exam. You can also get other related essays and related information such as:

Essay on Terrorism in India