Gandhi Jayanti is celebrated in India, every year on 2nd October, to commemorate the birth of Mohandas Karamchand Gandhi (2nd October 1869-30th January 1948). Gandhi is commonly called Mahatma Gandhi and also has a nickname “Bapu”. He was the greatest motivator and independence campaigner of his time. His unique ability to connect with the poor made him a mass leader of India, also earning him the sobriquet “Father of the Nation”. His policy of peaceful, non-violent protests was something new to the world and also acknowledged by the many nations.

Gandhi Jayanti is a national holiday celebrated all through India every year on the 2nd of October to mark the birth anniversary of the Mohandas Karamchand Gandhi. He is well known as Father of the Nation or Bapu. This title is not declared officially to him as it is not permitted by the Constitution of India to make someone a father of the nation. The birth anniversary of Mahatma Gandhi has been declared as International Day of Non-Violence by the United Nations General Assembly on the 15th of June 2007. Gandhi is celebrated as the national holiday all through India however as International Day of Non-Violence all through the world.

Schools and government offices remain closed on this day all over the country. It is observed in all the states and union territories of India. It is celebrated as one of the three national events of India (the other two are Independence Day, 15 August and Republic Day, 26 January). It is marked by including some important activities such as prayer services, tributes by the government officials at Raj Ghat, Gandhi's memorial in New Delhi (cremation place). 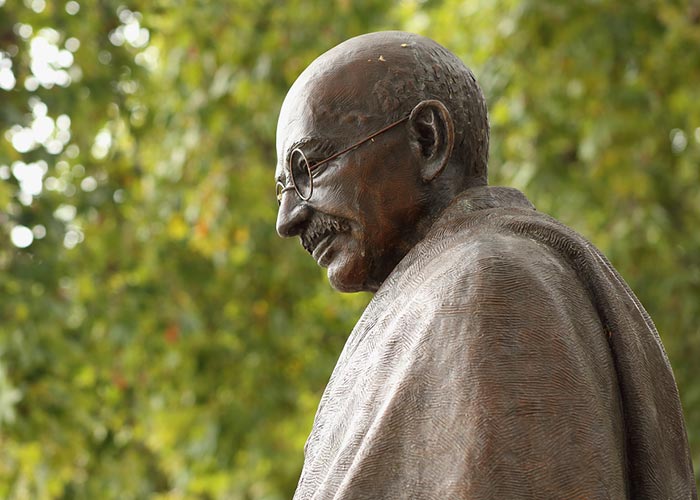 Other activities are like prayer meetings, commemorative ceremonies, drama play, speech recitation (on the themes like non-violence, glorifying peace, and Gandhi's effort in Indian Freedom Struggle), essay writing, quiz competition, painting competition, poem recitation, etc in the schools, colleges, local government institutions, and sociopolitical institutions. The best award is granted to the students doing the best in any of the competitions. On this day, his favorite bhajan, Raghupathi Raghava Rajaram, is generally sung in his memory during the celebration.

Gandhi Jayanti is celebrated every year as the third important national event. It is celebrated on the 2nd of October by the Indian people all over the country to pay tribute to the Mahatma Gandhi on his birthday. He is popularly known as the Father of the Nation or Bapu. He was a patriotic leader and led the country all through the Indian independence movement by following the way of non-violence. According to him, truth and non-violence are the only tools to win the fight for independence from British rule. He went to jail many times however continued his non-violence movement till the freedom of the country. He was always in the favor of social equality however against untouchability.

Gandhi Jayanti is celebrated with huge preparations at the Raj Ghat or Gandhiji's Samadhi in New Delhi by the government officials. Cremation place at Raj Ghat gets decorated with garlands and flowers. Homage is paid to this great leader by placing wreaths at the Samadhi and some flowers. Religious prayer is also held in the morning at the samadhi. It is celebrated as the national festival especially by the students in schools and colleges all over the country.

Students celebrate this occasion by playing drama, reciting a poem, song, speech, essay writing, and participating in other activities like quiz competition, painting competition, etc based on the life of Mahatma Gandhi and his works. His most favorite devotional song ''Raghupati Raghav Raja Ram'' is also sung by the students in his memory. Best performing students are awarded the prizes. He has been the role model and inspirational leader for many political leaders and especially the youths of the country. Other great leaders such as Martin Luther King, Nelson Mandela, James Lawson, etc got inspiration from Mahatma Gandhi's theory of non-violence and peaceful ways to fight for freedom and liberty.

Gandhi Jayanti is a national event celebrated every year to pay tribute to the Father of the Nation, Mahatma Gandhi. This day is also celebrated as the International Day of Non-Violence all over the world. Gandhi Jayanti has been declared as International Day of Non-Violence by the United Nations General Assembly on the 15th of June 2007. Gandhi Jayanti is observed as a national holiday all through the country in order to commemorate the birth anniversary of Mohandas Karamchand Gandhi (born on the 2nd of October in 1869). His non-violence movement for independence of India is still continues influencing political leaders and youths of our own country as well as other countries worldwide.

The aim of celebrating Gandhi Jayanti as the International Day of non-violence is to distribute Bapu's philosophy, believe in non-violence, principle, etc all over the world. It is celebrated through theme-based proper activities in order to enhance public awareness worldwide. Gandhi Jayanti's celebration involves commemorating Mahatma Gandhi’s life and his contributions to India’s Independence. He was born in a small coastal town (Porbandar, Gujarat) however he performed great works all through his life which still influences the people in advance era.

He worked great for achieving Swaraj, remove untouchability from society, the abolition of other social evils, improving the economic condition of farmers, empowering women's rights and many more. The movements run by him are the non-cooperation movement in 1920, Dandi March or Salt Satyagraha in 1930 and the Quit India Movement in 1942 in order to help Indian people in getting freedom from British rule. His Quit India Movement was a call to the British to leave India. Gandhi Jayanti is celebrated in various innovative ways by the students, teachers, government officials, etc all over the country. It is celebrated at Raj Ghat, New Delhi by offering flowers on Gandhi’s statues, singing his favorite devotional song “Raghupati Raghava Raja Ram” and other ceremonial activities by the government officials.

It is one of the three National Holidays of the country (other two are Independence Day and Republic Day) celebrated every year in the schools, colleges, educational institutions, government, and non-government organizations, etc. Schools, colleges, government offices, post offices, banks, etc remain closed on Gandhi Jayanti in order to pay tribute to the great leader of India. We remember Bapu and his great deeds by celebrating Gandhi Jayanti. Students are assigned for various tasks to perform at this day such as poem or speech recitation, drama play, essay writing, slogan writing, group discussion, etc based on the life and works of Mahatma Gandhi.

Though the civil disobedience movement was started in 1919 with the launch of the Non-cooperation movement against the British government after the Jallianwala Bagh massacre, it became prominent only after the salt march. The Namak Satyagrah or the Salt March was the inception of the mass civil disobedience movement. Led by Mahatma Gandhi, the Salt March was a 26 days march conducted from the Sabarmati Ashram on 12th March 1930 and ended on 6th April 1930 at Dandi, a coastal village in Gujarat.

The march was started with few members, the number of followers increased as it gained momentum. The main aim of the march was to protest against the British taxation system and breaking the law which was against the local production of salt. This lead to the mass civil disobedience and people started making salt on a large scale challenging the law imposed by the British government. Consequently, there were huge arrests done on a large scale.

The salt march which started to locally produce salt took the face of mass civil disobedience movement. People started boycotting British products and the emphasis on the Swadeshi movement became more eminent. British cloths and products were burnt on a very large scale. Farmers refused to pay taxes to the British government.

People started resigning from the prominent government posts of the British administration. Teachers, soldiers and people from civil services left their jobs supporting the national movement. The Civil Disobedience of 1930 saw huge participation of women. Women from all sections of the society took active participation in ‘satyagraha’ and started production and selling of salt and in course supporting the civil disobedience movement.

The Civil Disobedience Movement shook the foundation of the British Rule and they suffered huge economical and administrative losses. The ‘Swadeshi’ Movement helped to set up many manufacturing units to manufacture the products in India.

The boycott of British products impacted imports from Britain. People refused to pay taxes to the government and started producing salt on a larger scale which highly affected the Britishers in monetary ways. The most beneficial part of the protest was that the British government was in dilemma on how to react to non-violent protests and civil disobedience.

Even the British officials said that it was easy to fight the violent protesters than the non-violent protesters. The non-violent civil disobedience movement attracted international attention to the Indian freedom struggle and also revealed the cruel policies of Britishers against Indians. The Quit India movement launched on 8th August 1942 was the final nail in the coffin of the British Government and they agreed to give India complete Independence once World War II ends.

The Civil Disobedience Movement played a significant role in the Indian freedom struggle. It helped to unite the nation and fought for a cause. It started with a pinch of salt but became a national movement against the British government. Civil Disobedience was a non-violent movement that did not spill even a single drop of blood and made a huge impact on Indian freedom struggle.