Below we have provided a very simple written essay on Mahatma Gandhi, a person who would always live in the heart of Indian people. Every kid and children of India know him by the name of Bapu or Father of the Nation. Using the following Mahatma Gandhi’s essay, you can help your kids and school going children to perform better in their school during any competition or exam.

Bapu, Mohandas Karamchand Gandhi, was born in 1869 on the 2nd of October at Porbander in Gujarat, India. Mahatma Gandhi was a great Indian who led India with independence movement against British rule. He completed his schooling in India and went to England for further study of law. He returned to India as a lawyer and started practicing law. He started helping people of India who were humiliated and insulted by the British rule. 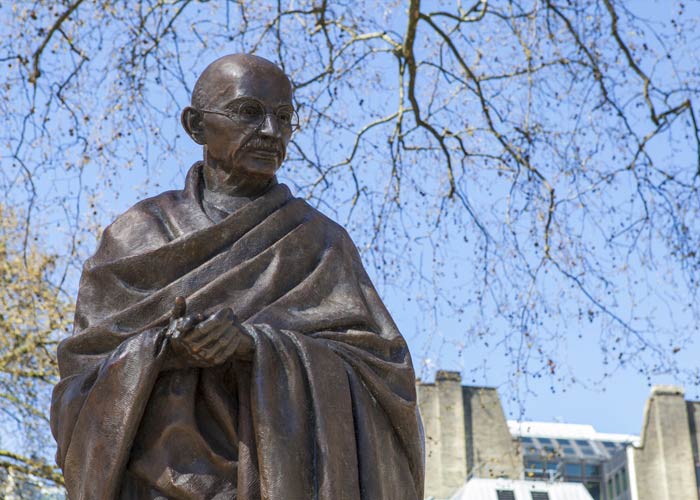 As a great freedom fighter, he got arrested and sent to jail many times but he continued fighting against British rule for the justice of Indians. He was a great believer in non-violence and unity of people of all religions which he followed all through his struggle for independence. After his lots of struggles with many Indians, finally, he became successful in making India an independent country on the 15th of August in 1947. Later he was assassinated in 1948 on the 30th of January by the Nathuram Godse, a Hindu activist.

Mahatma Gandhi was a great freedom fighter who spent his whole life in the struggle for the independence of India. He was born in the Indian Hindu family on the 2nd of October in 1869 in the Porbander, Gujarat. He lived his whole as a leader of the Indian people. His whole life story is a great inspiration for us. He is called the Bapu or Rashtrapita as he spent his life fighting against British rule for the freedom of us. While fighting with Britishers he took the help of his great weapons like non-violence and Satyagraha movements to achieve freedom. Many times he got arrested and sent to the jail but he never discourages himself and continued fighting for national freedom.

He is the real father of our nation who really used his all power to make us free from the British rule. He truly understood the power of unity in people (from different castes, religions, community, race, age or gender) which he used all through his independence movement. Finally, he forced Britishers to quit India forever through his mass movements on the 15th of August in 1947. Since 1947, the 15th of August is celebrated every year as the Independence Day in India.

He could not continue his life after the independence of India in 1947 as he was assassinated by one of the Hindu activists, Nathuram Godse in 1948 on the 30th of January. He was the great personality who served his whole life till death for the motherland. He enlightened our life with the true light of freedom from British rule. He proved that everything is possible with the non-violence and unity of people. Even after getting died many years ago, he is still alive in the heart of every Indian as a “Father of the Nation and Bapu”.

Mahatma Gandhi is well known as the “Father of the Nation or Bapu” because of his greatest contributions towards the independence of our country. He was the one who believed in the non-violence and unity of the people and brought spirituality in Indian politics. He worked hard for the removal of the untouchability in the Indian society, upliftment of the backward classes in India, raised voice to develop villages for social development, inspired Indian people to use swadeshi goods and other social issues. He brought common people in front to participate in the national movement and inspired them to fight for their true freedom.

He was one of the persons who converted people’s dreams of independence into truth a day through his noble ideals and supreme sacrifices. He is still remembered between us for his great works and major virtues such as non-violence, truth, love, and fraternity. He was not born as great but he made himself great through his hard struggles and works. He was highly influenced by the life of King Harischandra from the play titled Raja Harischandra. After his schooling, he completed his law degree from England and began his career as a lawyer. He faced many difficulties in his life but continued walking as a great leader.

He started many mass movements like the Non-cooperation movement in 1920, the civil disobedience movement in 1930 and finally the Quit India Movement in 1942 all through the way of independence of India. After lots of struggles and works, the independence of India was granted finally by the British Government. He was a very simple person who worked to remove the color barrier and caste barrier. He also worked hard for removing the untouchability in Indian society and named untouchables as “Harijan” means the people of God.

He was a great social reformer and Indian freedom fighter who died a day after completing his aim of life. He inspired Indian people for manual labor and said that arrange all the resources ownself for living a simple life and becoming self-dependent. He started weaving cotton clothes through the use of Charakha in order to avoid the use of videshi goods and promote the use of Swadeshi goods among Indians.

He was a strong supporter of agriculture and motivated people to do agriculture works. He was a spiritual man who brought spirituality to Indian politics. He died in 1948 on the 30th of January and his body was cremated at Raj Ghat, New Delhi. 30th of January is celebrated every year as the Martyr Day in India in order to pay homage to him.

The role of non-violence in the Indian freedom struggle became prominent after the involvement of Mahatma Gandhi. There were many violent freedom struggles going on concurrently in the country and the importance of these cannot be neglected either. There were many sacrifices made by our freedom fighters battling against the British rule. But non-violence was a protest which was done in a very peaceful manner and was a great way to demand the complete independence. Mahatma Gandhi used non-violence in every movement against British rule. The most important non-violence movements of Mahatma Gandhi which helped to shake the foundation of the British government are as follows.

Kheda village was hit by floods in 1918 and created a major famine in the region. The Britishers were not ready to provide any concessions or relief in the taxes. Gandhiji organized a non-cooperation movement and led peaceful protests against the British administration for many months. Ultimately the administration was forced to provide relief in taxes and temporarily suspended the collection of revenue.

The Jallianwala Bagh massacre and the harsh British policies lead to the Non-cooperation movement in 1920. It was the non-violence protest against the British rule. Gandhiji believed that the main reason for the Britishers flourishing in India is the support they are getting from Indians. He pleaded to boycott the use of British products and promoted the use of ‘Swadeshi’ products. Indians denied working for the Britishers and withdrew themselves from British schools, civil services, government jobs, etc. People started resigning from the prominent posts which highly affected the British administration. The Non-Cooperation movement shook the foundation of the British rule and all these without a single use of any weapon. The power of non-violence was more evident in the non-cooperation movement.

Salt March or the ‘Namak Satyagrah’ was the non-violence movement led by Mahatma Gandhi against the salt monopoly of the Britishers. Britishers imposed heavy taxation on the salt produce which affected the local salt production. Gandhiji started the 26 days non-violence march to Dandi village, Gujarat protesting against the salt monopoly of the British government. The Dandi march was started on 12th March 1930 from Sabarmati Ashram and ended on 06th April 1930 at Dandi, breaking the salt laws of the British government and starting the local production of salt. The Salt March was a non-violent movement that got international attention and which helped to concrete the foundation of Independent India.

Mahatma Gandhi always believed that weapons are not the only answer for any problem; in fact, they created more problems than they solved. It is a tool that spreads hatred, fear, and anger. Non-violence is one of the best methods by which we can fight with many powerful enemies, without holding a single weapon. Apart from the independence struggle; there are many incidents of modern times that exhibited the importance of non-violence and how it helped in bringing changes in the society and all that without spilling a single drop of blood. I hope the day is not very far when there will be no violence and every conflict and dispute will be solved through peaceful dialogues without harming anyone and shedding blood and this would be the greatest tribute to Mahatma Gandhi.

Importance of Trees in our Life Essay

Essay on Depletion of Natural Resources