The Indian National Flag is a symbol of India’s freedom and its integrity. It symbolizes that the nation is governed by its own people, without any foreign interference. Prideful display of the flag demarcates Indian territories and act as a warning to the invaders. National Flag of India is a rectangular Tricolor with three horizontal stripes of saffron, white and green, from top to bottom respectively.

In the middle of the white stripe there is an impression of Ashoka Wheel of Ashoka Chakra printed in blue. The Flag is based on Swaraj Flag designed by Pingali Venkayya. Saffron represents courage and sacrifice, white is a symbol of peace and green represents fertility and prosperity. Tricolor display is governed by the Flag code of India and any act of dishonor to the National Flag is a punishable offence.

Long and Short Essay on National Flag of India in English

The National flag of India is a symbol of honour and freedom for the country. It is of great significance to us. We should respect and know everything about our national flag.

After going through the essays you would know the history of our National flag as well as its significance in keeping the nation united.

You can select any of the below given essays and present it in speech, debates of essay writing competitions in your school or college. 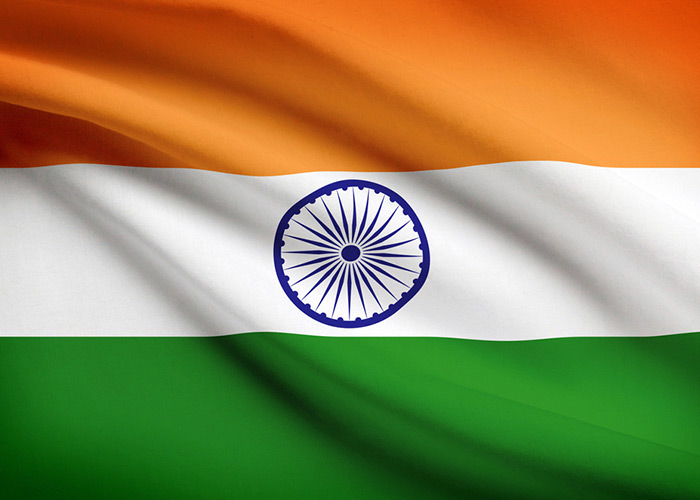 It is hoisted in the government offices, schools and other educational institutions on the occasions of Republic Day, Independence Day and other national events. Indian national flag was first time adopted on July 22nd in 1947. Our national flag is a beautifully designed tricolour flag, also known as Tiranga. It is made up of hand-made Khadi clothes. It is completely restricted to make the Indian flag using clothes other than the Khadi. The topmost colour of national flag is saffron, middle white and lower deep green. Saffron colour symbolizes sacrifice and selflessness, white colour truth and purity and green youth and energy.

Our national flag teaches us the lesson of unity, peace and humanity. It helps us to believe in the truth and unity. It is hoisted every year by the Indian prime Minister of India on 15th of August and by the President of India on 26th of January. However, it is hoisted by both of them at Red Fort followed by address to people of India. Our national flag is made up of khadi clothe, a hand-made clothe initiated by the Mahatma Gandhi. It is strictly prohibited in our country to fly a national flag made up of clothe other than Khadi.

India got independence after long years of struggle of more than thousands brave Indian freedom fighters. India got freedom on 15th of August in 1947 from the British rule. Some days before the independence of India, the national flag of India was adopted on 22nd of July in 1947 (in the meeting of constituent assembly) as a symbol of unity and great triumph. Our national is tricolour so called Tiranga Zanda. Our national flag is courage and inspiration for us. It makes us remember about the sacrifices of our great Indian freedom fighters. It makes us remember that how tough that moment was for them. Getting freedom was not so easy. We should always respect our flag and never let it go down for our motherland.

Our national flag is horizontally designed using tricolour strips of saffron, white and green. The middle white portion has navy blue Ashok Chakra with 24 spokes. All the three colours, Ashok Chakra and 24 spokes have their own meaning and significance. The uppermost Saffron colour symbolizes the devotion and renunciation. The middle white color indicates the peace and harmony. And the lowermost green colour indicates youth and energy. However, the Ashoka Chakra (means Wheel of Ashoka) symbolizes the peace and courageousness.

Our national flag is made up of khadi clothe which is a special hand-spun cloth initiated by the Mahatma Gandhi. All the manufacturing processes and designing specifications are handled by the Bureau of Indian Standards. It is strictly forbidden in our country to use the flag made up of other clothes instead of Khadi.

Our national flag is also called as the Tiranga Jhanda as it has three colours. It contains tricolour horizontal stripes of uppermost saffron, middle white and lowermost green. The middle one white strip contains a navy blue Ashoka Chakra (also called Dharma Chakra) in its centre. The present time Indian national flag was first officially adopted in the Constituent Assembly meeting on 22nd of July in 1947. The ratio of length and width of the Indian flag is 3:2.

Prevention of Improper Use Act, 1950 and Prevention of Insults to National Honour Act, 1971 both, governs the use and display of national flag. Flag Code of India was established in 2002 to govern all the laws, practices conventions, and instructions to respect and honour the Indian flag. The Indian national flag was first proposed by the Mahatma Gandhi in 1921 to the Indian National Congress. Our national flag was first designed by the Pingali Venkayya. It is considered that the saffron and green strip was decided to honour both religions like Hindu and Muslim. Later a white strip was added in the middle with a spinning wheel in the centre to symbolize the respect to other religions.

Before the independence of India, various Indian flags were designed to precede the Indian Independence Movement to get freedom from the British rulers. Finally the present design of the national was officially adopted. Earlier the display of national flag was prohibited by the common public and it was only displayed by the government officials during any national event however later it was allowed to the common public to display the national flag to their own premises. It is a symbol of unity and honour to our motherland, so we all should always respect our national flag and never let its honour go down.

The National Flag of India is also known as the Tiranga Jhanda. It was first officially adopted during the meeting of Constituent Assembly on July 22nd in 1947. It was adopted 24 days before the independence of India from British rule. It was designed by the Pingali Venkayya. It was so designed in horizontal shape having three colours of saffron, white and green in equivalent proportions. The upper saffron colour, white middle, lower dark green colours. Our national flag contains 2:3 ratio of width and length. In the centre a navy blue wheel having 24 spokes is designed in the middle white strip. Ashoka Chakra was taken from the pillar of the Ashok, Sarnath (Lion Capital of Ashoka).

Our national flag is of great significance to all of us. All the colours, strips, wheel and clothe used in the flag have their special significance. Flag code of India decides the use and display of national flag. Till 52 years after the independence of India, national flag was not allowed to display by the people however later the rule was altered (according to the flag code 26th January 2002) to use flag at homes, offices and factories on any special occasion. National Flag is hoisted on the national occasions like Republic day, Independence day, etc. It is also displayed in the schools and educational institutions (colleges, universities, sports camps, scout camps, etc) to inspire the students for honouring and respecting the Indian Flag.

Students take an oath and sing national anthem while unfurling the national flag in the schools and colleges. Public and private organization members may also hoist the flag on any occasions, ceremonial event, etc. It is restricted to display the national flag for any communal or personal gains. Nobody is allowed to display the flag made of other clothes otherwise it is a punishment of imprisonment and fine. National Flag can be flown from morning till evening (sunrise to sunset) in any weather. It is prohibited to intentionally dishonour the national flag or touch it to the ground, floor or trail in water. It should not be used to cover the top, bottom, sides or back of any vehicle, like car, boat, trains, or aircraft. On flag other than the Indian should be displayed at higher level.

National Flag of India, fondly known as Tiranga, is the nation’s pride. It is an important and integral part of the Republic of India. It represents the sovereignty of the country and is respected by its citizens. It is flown on all the government buildings in India. It is a ritual to hoist the national flag of India on national festivals such as Independence Day, Republic Day and Gandhi Jayanti.

Importance of the Indian National Flag

The National Flag of India reflects its culture, civilization and history. The flag flowing in the air is a symbol of freedom. It reminds the Indian citizens of the sacrifices made by the freedom fighters to free our country from the tyranny of the British. It also inspires them to be humble and value the freedom and independence they have attained after much struggle.

The Indian national flag is referred to as Tiranga as it consists of three colours -Saffron, White and Green. The saffron colour on the top symbolizes indifference which means our leaders must remain indifferent towards materialistic things. Serving the nation should be on the top of their priority list and they must do their work selflessly. The white colour in the middle represents truth and purity which means we must always follow the path of truth and right conduct. The green colour at the bottom symbolizes soil and nature and reminds us to stay grounded to our roots.

The Ashoka Chakra printed in the middle of the flag on the white portion is a symbol of the law of Dharma. It means that Dharma or virtue must be the main guiding principles of those who serve the nation. It is also a symbol of motion and inspires to keep moving in life irrespective of the challenges and hardships.

History of the Indian National Flag

It was Mahatma Gandhi who came up with the idea of a flag for the Indian National Congress in the year 1921 when the struggle for Indian independence was still going on. The flag had a spinning wheel printed in the middle as it symbolized Bapu’s goal of making the citizens of India self-reliant by spinning and fabricating clothes. The design of the flag evolved and improvised with time. On India’s independence, the flag was modified further and the spinning wheel was replaced by the Ashoka Chakra that is the eternal wheel of law.

Our National Flag is our pride. We must uphold its dignity even if it is at the cost of our lives. It must always flow high as it is a symbol of the freedom that was earned after years of struggle and sacrifices.

Slogans on National Flag of India

Essay on National Festivals of India

Paragraph on National Festivals of India

Essay on Importance of Independence Day in India

Essay on My Father My Hero